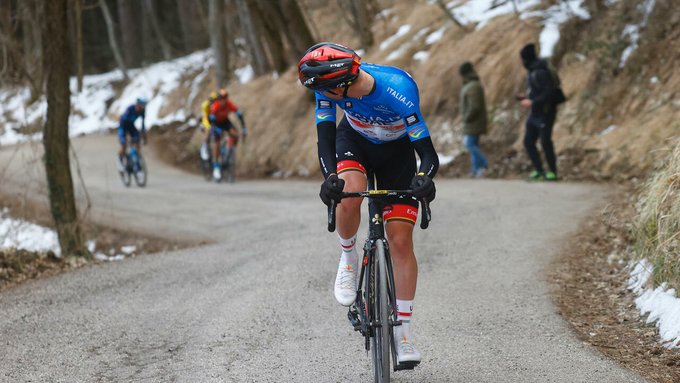 Tadej Pogacar was fastest both up the mountains and down them as he won the sixth stage of the Tirreno-Adriatico on Saturday to increase his overall lead.

The action was concentrated on two climbs up Monte Carpegna in the final 32 kilometres of a 215 kilometre stage from Apecchio to the town of Carpegna.

While Pogacar, who started the day nine seconds ahead of Remco Evenepoel, stayed in the leader’s blue jersey, the places behind him were shaken up. As the peloton disintegrated on the first ascent, Pogacar was part of a 21-rider group that overhauled a long breakaway.

On the second climb, Pogacar attacked and left his rivals behind.

Jonas Vingegaard and Mikel Landa stayed with Pogacar longest but were dropped some four kilometres from the top.

“I had good legs,” said Pogacar. “We decided to go for it. I went at my best pace to the top. I tried to get warm. It was super cold today.”

Pogacar increased his lead on a tricky, snow-lined descent where others struggled. Vingegaard complained at the finish that there was gravel on the road left behind by melting snow.

Pogacar finished one minutes and three seconds ahead of Vingegaard and Landa. Richie Porte was another 31 seconds back in fourth.

“When the guys are pulling all day into the headwind for 200km, to take the stage win on such an important day is a good feeling,” Pogacar said.