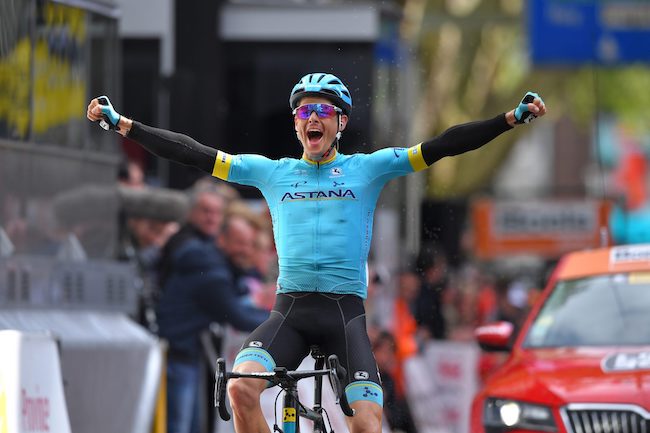 Jakob Fuglsang (Astana) won Liege-Bastogne-Liege on Sunday after he attacked from the peloton on the final climb of the day and dropped his companions in the break.

“My team were there at all the important moments for me,” he said. Even when one teammate went off a verge ahead of the final climb, Fuglsang still had three more Astana men with him.

Fuglsang decided to go all in when Michael Woods attacked form a small group on the final climb.

The former mountain biker champion had a brush with disaster just 5km from home after sliding on white markings on the rain-slick road only to miraculously regain control of his bike.

“It gave me the adrenalin rush I needed to get to the line,” Fuglsang said at the winning post. My wife told me to forget all my second places because I was going to win, now I’ll listen to her in future,” he joked.

Despite looking fresh after the race he admitted Schachmann had suffered on a cold, wet day.

“The weather was extreme at three degrees and it rained for I don’t know how many hours,” he said.

The well-wrapped peloton that embarked Sunday morning through the winding Ardennes forests soon lost former winner Dan Martin and a frozen looking world champion Alejandro Valverde who both pulled out early on.

A group of six ambitious riders launched a long-range escape from 13km, swiftly racking up a 10 minutes gap before the last survivor Julien Bernard was caught 70km out.

Greg Van Avermaet and Philippe Gilbert then attacked from deep, but only succeeded in losing energy and the initiative.

With 11 climbs there were a string of escapes all reeled in by the team of pre-race favourite Julian Alaphilippe.

The Frenchman edged Fuglsang after a two-man break in the Fleche and the pair also escaped together in the Amstel Gold before being caught in the last 400 metres. This time Alaphilippe was dropped on the sharper section of the final climb when Fuglsang’s lead was still just a handful of seconds.

But Fuglsang, Nibali, Yates and others went after a fading Woods, overtaking the Canadian a couple of kilometres out.

Yates bided his time in the elite group over the final 100km but just missed out on the podium as Schachmann edged him on the line leaving the Briton with a respectable fourth place.