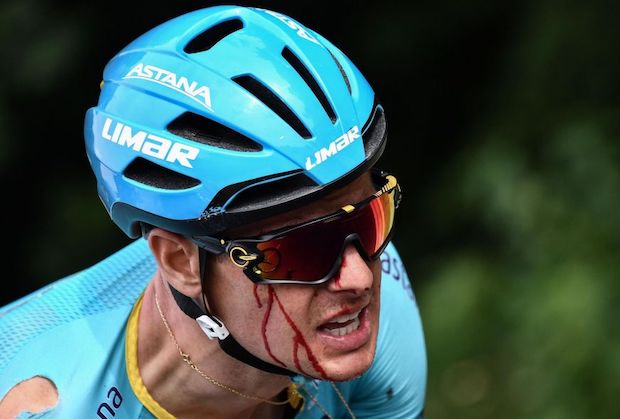 Jakob Fuglsang said he will carry on in the despite a heavy crash in Saturday’s opening stage of the Tour de France that left him bloodied and bruised.

The Danish rider, tipped as one of defending champion Geraint Thomas’s main rivals for the yellow jersey, went down with around 17km remaining and finished the stage with blood streaming from a wound above his eye.

It looked bad for the Astana rider but he was helped back into the peloton by his team mates, finishing in the pack before disappearing into a medical truck for treatment.

He emerged with four stitches inserted in the cut and was hobbling after bruising his knee, shoulder and elbow. The good news was that X-rays showed no fractures.

“A rider crashed in front of me at the moment we were going to the front of the peloton to stay out of trouble, it was impossible to avoid him and so I crashed,” Fuglsang said.

“It’s not the way you want to start the Tour. I’m happy that there were no fractures, so I’m able to continue the race. We’ll see how it goes tomorrow.”