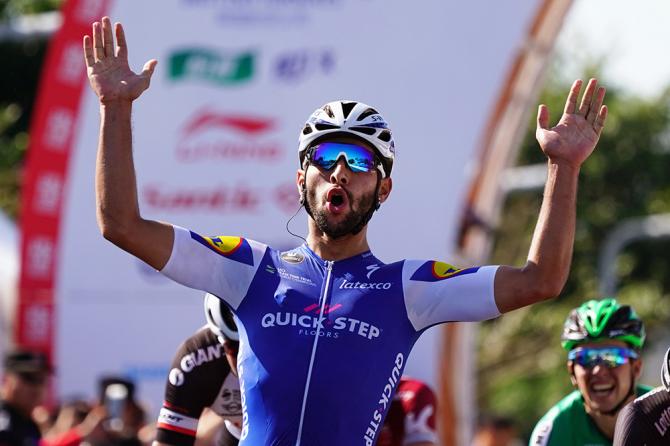 Gaviria won stage 4 after edging world champion Peter Sagan (Bora-hansgrohe) in a sprint finish to the flat 195-kilometer leg from La Baule to Sarzeau that started and finished on the Atlantic coast.

The 23-year-old Colombian had already won Stage 1 – when he also edged Sagan – on his Tour debut.

Defending champion Chris Froome, who entered the day 55 seconds back after losing time in a fall on the opening stage, finished safely in the pack with leader Van Avermaet.

“Everyone in Colombia is watching the Tour de France and I feel like my nation’s representative,” said Gaviria. “The team had to work really hard to catch the escape, nobody else was helping,”.

The frenetic finish was so close, the riders all watched the replay on a giant screen to see how the shares had been spoiled.

“I took Greiple’s wheel, so it could have been better,” Sagan joked afterwards. “Second is better than third,” he added.

Despite the late fall in the peloton, overnight leader Greg van Avermaet of BMC held on to the race leader’s yellow jersey.

“We are happy to have kept the yellow,” said Van Avermaet. “I hope it brings us luck in the semi-final,” he added in reference to the World Cup semi-final later Tuesday which pitches Belgium against France.

Van Avermaet would normally be one of the favourites to clinch Wednesday’s hilly run to Quimper, but will face a stiff challenge for the jersey.

“It’s the first big stage of this kind and we are going to see time difference in the overall standings, it just depends who wants to go for it,” he said.