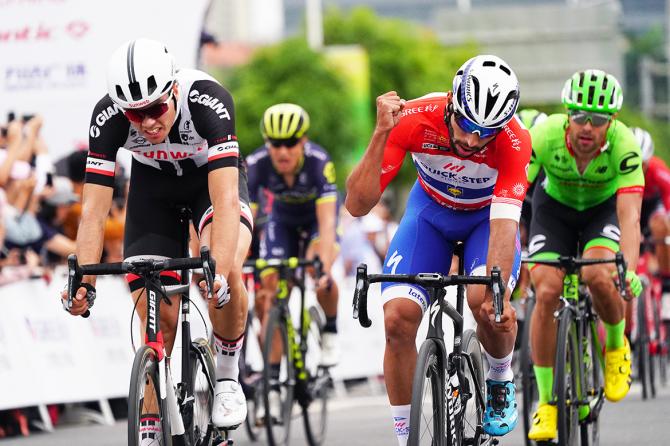 Fernando Gaviria (Quick-Step Floors) racked up another victory at the Tour of Guangxi, conquering the second stage ahead of Max Walscheid (Sunweb) and Wouter Wippert (Cannondale-Drapac).

Measuring 156.7 kilometers, the stage which rolled out from Qinzhou – a small town on the Gulf of Tonkin – got off to a furious start, as several riders fought to book a place in the day’s escape.

A break formed only after the first intermediate sprint, 25 kilometers into the stage, but the attackers weren’t allowed too much space, with the sprinters aware they couldn’t miss their second opportunity at this final World Tour race of the season.

With five kilometers left, as the men in the lead got reeled in, the blue Quick-Step Floors train emerged and piloted Fernando Gaviria into a perfect position, from which the Giro d’Italia maglia ciclamino kicked off his powerful acceleration, some 200 meters from the line, to notch up his 12th victory of the season.

“The guys were great once again, protecting me throughout the day and making the difference in the final, so this win is for them”, said Gaviria. “A big shout out goes to Martin Velits, who is retiring after this race and continued to work hard for me. It was harder than yesterday, with a crazy last kilometer and a longer and tougher sprint this time on an uphill drag, so having won in these conditions makes me very happy. Four more stages are left in the store and the plan is to take everything day by day, looking for other opportunities and helping the team conclude the season on a high.”