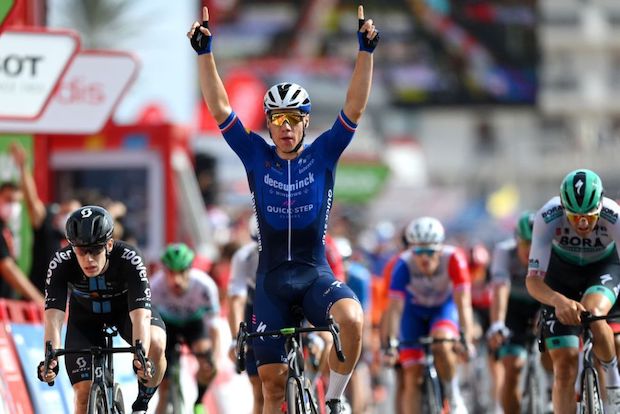 Fabio Jakobsen grabbed his second Vuelta a Espana stage win in a week on Saturday, continuing his extraordinary career revival by powering to victory on stage 8.

The Dutchman bided his time in a frantic bunch sprint at the end of the 173km flat ride from Santa Pola to La Manga del Mar Menor before surging to the front of the queue and keeping his wheel ahead of Alberto Dainese and Jasper Philipsen, who came second and third respectively.

Jakobsen also won Tuesday’s stage three, a year after a horrific crash in the Tour of Poland in August 2020 which led to him being put in a medically induced coma and having five hours of surgery for a brain trauma after a high-speed collision with Dylan Groenewegen near the finish line.

There was no change in the overall lead in Spain as Roglic and his fellow general classification contenders came over the line together right behind Jakobsen.

Roglic has an eight-second overall lead over Austrian Felix Grossschartner and a 25-second advantage over Enric Mas heading into Sunday’s stage 9, a punishing 188km mountain route from Puerto Lumbreras to Alto de Velefique which could lead to a change in the general classification.