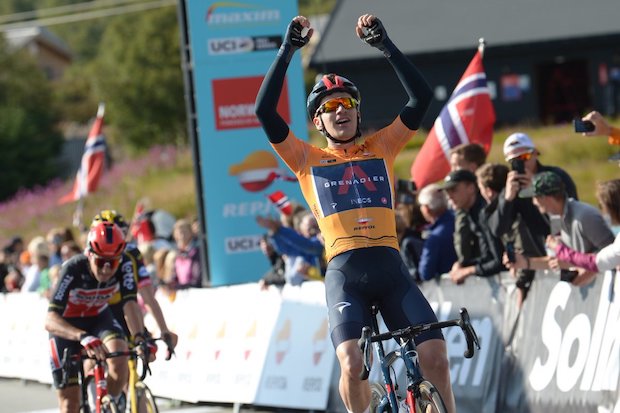 Ethan Hayter (Ineos Grenadiers) won the second stage of the Tour of Norway, a 187km ride with departure and arrival in the city of Sirdal, beating the Tosh Van der Sande (Lotto Soudal) and the Mike Teunissen (Jumbo–Visma) in the sprint.

“I can’t believe it to be honest. It’s amazing”, said Hayter. “It was crazy coming into the climb. I followed an attack that was dangerous coming into the finale which in the end positioned me well for the climb, even if it did come back. In the end I probably shouldn’t have gone with it but you have to defend the jersey, you have to try.

“Then it got really crazy when the catch was made. I found my way through, worked my way up, kept my position. I sprinted with 50m to go which felt like it was crazy late, but it was enough to win.

“I was suffering today. I wasn’t sure if we’d bring the break back because they were strong. But it’s a bike race and you have to go for it. People started to help us at the end but for most of the day it was just three of our guys on the front – they were amazing.”