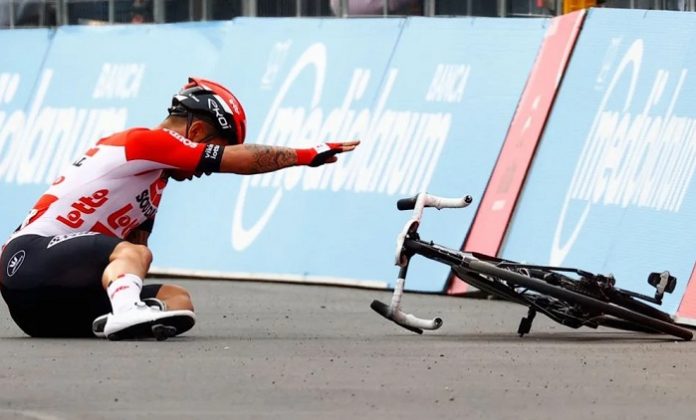 Caleb Ewan has suffered a dramatic and painful crash in the final metres of the opening stage of the Giro d’Italia in Hungary while battling for victory.

Ewan had almost emptied his tank of energy as he tried to make his final attack over the last 100 metres on the demanding final climb to the finish in Visegrad on Friday.

But still threatening in third place while trying to take victory and the leader’s pink jersey, he clipped the back wheel of Biniam Girmay’s bike just ahead, which sent him crashing down hard across the road at high speed.

Ewan lay on the tarmac for a brief moment, in scenes similar to last year’s Tour de France crash and exit, but was soon back on his feet.

Mathieu van der Poel went on to pip Girmay for victory while Ewan, with his top torn around his left shoulder, eventually rose groggily, remounted and grimaced as he needed assistance to struggle across the line in 76th place.

However, Friday’s crash was not very serious, with his team reporting: “Apart from several abrasions, Caleb came away without any severe injuries and will take the start in the individual time trial tomorrow.”