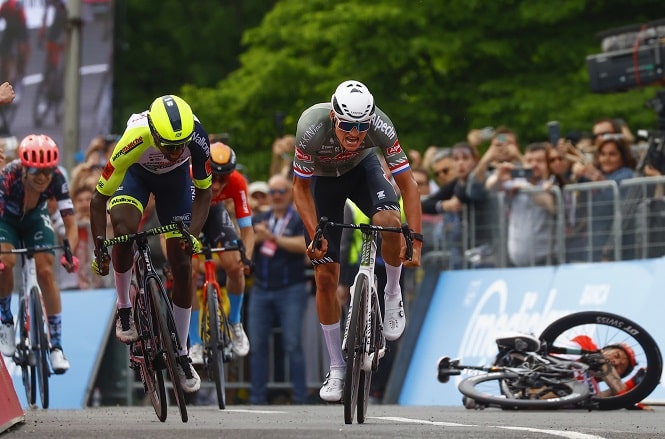 Mathieu van der Poel won the opening stage of the Giro d’Italia on Friday, a 195km run from Budapest to the hilltop citadel at Visegrad.

Van der Poel edged Biniam Girmay and Pello Bilbao to the finish line atop a 4km climb as Caleb Ewan fell heavily when making his burst for the line. Van Der Poel took the first race leaders pink jersey, and collected a time bonus of 10 as the first rider across the summit.

“I knew positioning would be key,” said Van der Poel, whose team flew to the front at the foot of the climb as he then lurked patiently until the final moment.

“Tomorrow will be interesting to see if I can keep the lead in the time trial. It’ll be difficult but I’ll try,” promised the Alpecin-Fenix rider.

The race returns to Budapest on Saturday for a testing inner-city circuit of 9.2km with the first rider down the starters ramp at 14.00 local time.

The 176-rider peloton left Budapest for the first of 21 stages totalling 3,446km. That was no deterrent to Italian pair Mattia Bais and Filippo Tagliani who broke away as soon as the starter’s flag waved.

They were only reeled in by a reluctant peloton 13km from the finish.

The Giro opens with three days in Hungary and on Friday mounted Hussars galloped alongside the peloton, which itself looked impressive as it swept along the banks of the Danube river towards the castle at Visegrad.