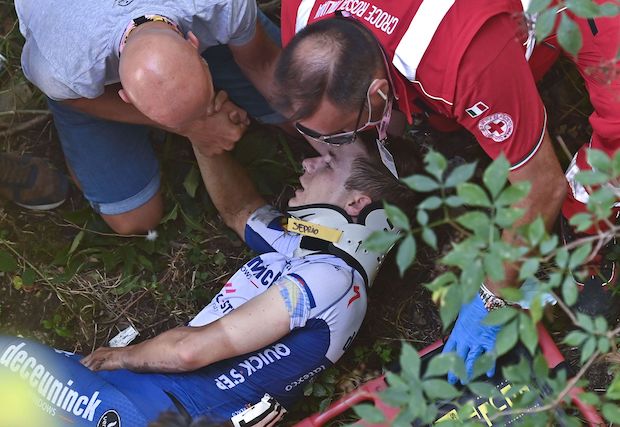 Remco Evenepoel fractured his pelvis and has a right lung contusion after crashing during Il Lombardia, which was won by Jakob Fuglsang.

The 20-year-old “crashed inside the last 50 kilometers, on the descent of Muro di Sormano, hitting a bridge wall and going over it into a ravine,” his Deceuninck-Quick-Step team said in a statement.

“Placed into a precautionary neck brace and taken to the Como hospital by ambulance, Remco was conscious at all times as he underwent a series of examinations to reveal the extent of his injury”, reads the statement.

“Unfortunately, the X-rays showed a fractured pelvis and a right lung contusion, which will keep Evenepoel – a winner of four stage races this season – on the sidelines for the upcoming period. Our rider will remain in the hospital overnight under observation, before flying on Sunday to Belgium”.

The young Belgian has more wins than any other rider this season with nine, which include victories at the Tour of Poland and the Volta a Burgos.

Maximilian Scachmann also crashed on the run-in to the finish line after a local car cut him off as he tried to take a corner. The German cyclist hit the deck but he managed to finish the race on 7th position.