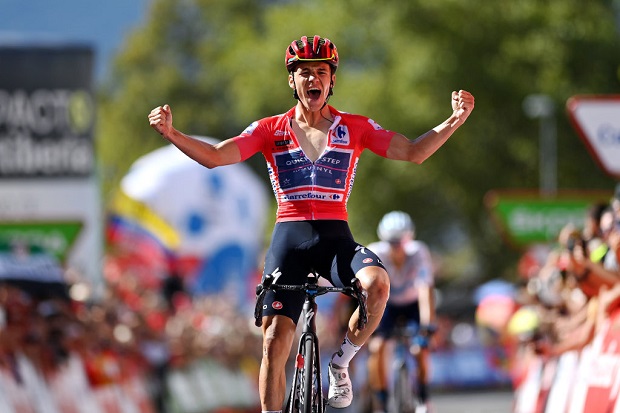 Remco Evenepoel made a strong statement with a victory in the 18th stage of the Vuelta, holding off the attack of his challengers and sprinting for the win at the summit.

It was the second stage win for the 22-year-old Belgian from team Quick-Step Alpha Vinyl.

“This was the most perfect day ever,” Evenepoel said. “Winning La Vuelta is still not done, with a really hard stage to come. They will for sure attack me. But maybe now it’s easier to control because I feel my legs are really good. This is very good for me and for the team for the last three days.”

The big stage victory came a day after three-time defending champion Primoz Roglic, who was his closest rival, withdrew because of injuries from a crash.

Evenepoel’s gap to second place Enric Mas stayed at more than two minutes. The Spaniard followed Evenepoel closely on Thursday and crossed the line just two seconds behind him at the Alto de Piornal.

“It was a pretty tough stage with really hard climbs in the finale,” Evenepoel said. “The race was really hard, but we always stayed calm. I think that’s what I learned, to always stay calm.”

Evenepoel has been leading the race since the sixth stage in the longest run at the top for a Belgian at a Grand Tour race since Johan De Muynck won the Giro d’Italia in 1978. That was the last victory for Belgium in a three-week race.