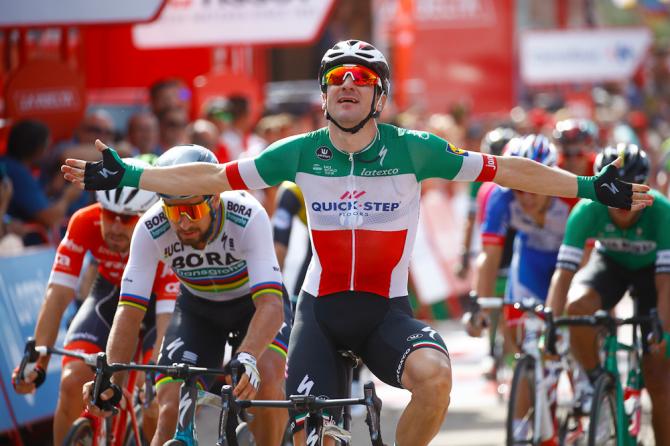 ”Everything went perfect,” Viviani said. ”I always dreamt of winning as many Grand Tour stages as possible. Now I have five at the Giro and two at La Vuelta and I want to enjoy my perfect train to win more until the end of La Vuelta.”

Yates had a puncture with about 15 kilometers to go but was able to rejoin the pack and maintain his one-second lead over Alejandro Valverde. Adam Yates, Simon’s twin, was among the riders who stayed behind to lead him back to the peloton.

”Things went relatively straightforward until the end, then I must have hit something on the side of the road, I punctured twice so it made things a bit nervous but we managed to control,” Yates said. ”I’m improving every year to try and win the general classification and now we’ll see how far I can go with this red jersey.”

Nairo Quintana, third overall, also had a puncture late in the stage, but recovered to remain 14 seconds behind Yates.

Diego Rubio broke away with about 20 kilometers to go, moving 20 seconds in front of the pack, but he was caught less than 10 kilometers from the finish.

On Wednesday, riders will face a 208-kilometer hilly route from Mombuey to Ribeira Sacra.