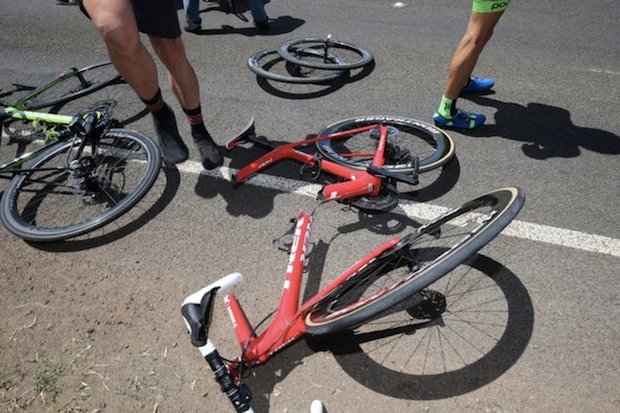 As riders struggled to hold the bunch in the wicked crosswinds during the first stage of the Herald Sun Tour, Laurent Didier was one of a number of riders brought down in crashes as riders scrambled to hold the wheels.

The Trek-Segafredo rider was involved in a crash with Thomas Kaeslar and Jesse Featoby, both Aussies from the Drapac EF team and Benjamin Andrews of Oliver’s Real Food.

But his bike was the most striking victim of the pile-up, lying on the road in two pieces held together with nothing but a hydraulic disc brake hose.

Tough day on the bike… A crash with multiple people falling on top of Laurent Didier’s bike meant the bike came off second best! ? @chronis71

The injuries to his back, elbow, leg and hand that Didier sustained in the crash meant that he was not able to start stage two.

#SunTour S2: Unfortunately, @laurentdidier was unable to take the start after his crash yesterday. He is not seriously injured, but has enough scrapes and contusions on his back, elbow, leg and a swollen hand, that to continue would be fruitless. We wish him a speedy recovery. pic.twitter.com/r310H8l84K