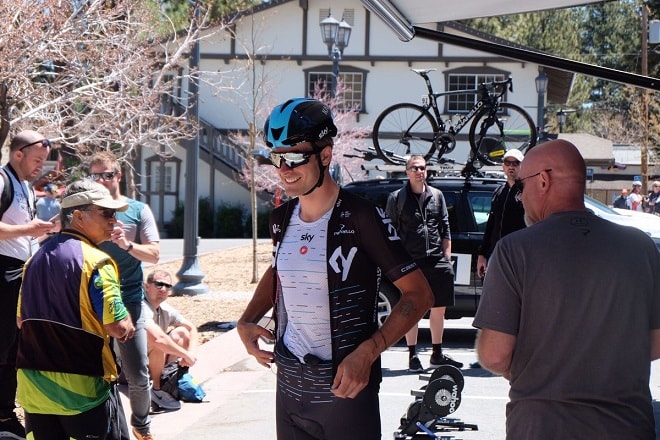 Jon Dibben (Team Sky) took a surprise victory in the stage 6 time trial at the Tour of California, as Brent Bookwalter (BMC) finished in second spot at seven seconds, with Andrew Talansky (Cannondale-Drapac) in third at 16 seconds.

One of the earlier riders to tackle the testing 24 kilometre course, Dibben had a long wait in the hot seat, and it was only in the closing stages that he started to believe he could actually claim his first professional road win.

“When I crossed the line I didn’t know I’d set the fastest time for a couple of minutes. I was pretty happy with that because I knew a few people who were targeting the time trial had gone before me. But I thought [Andrew] Talansky and [Brent] Bookwalter would be up there, so I didn’t think I’d be in the hot seat for long.

“Then when I beat Vegard Stake Laengen, who I thought would go well, I got slightly nervous. I started to believe. Watching the last guys come in was stressful!”

Team LottoNL-Jumbo rider George Bennett took the lead in the Tour of California after a fantastic time trial. The New Zealander placed fourth in the time trial and took much time on the competition. Bennett sits 35 seconds ahead of second placed Rafal Majka and 36 seconds on Andrew Talansky in third spot with one stage to race tomorrow.