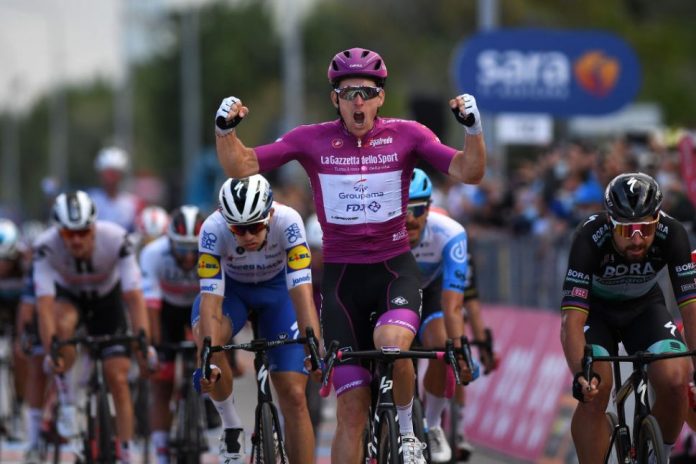 Arnaud Demare claimed his fourth stage victory on this year’s Giro d’Italia after a bunch sprint at the end of the 11th stage in Rimini on Wednesday.

The Groupama-FDJ rider was put to the front by his teammate and finished the job in style after a 182-km ride along the Adriatic coast from Porto Sant’Elpidio.

Peter Sagan was in the mix again after his win on Tuesday, but Demare edged out the Slovakian who had to be content with second place.

“Impressive, really impressive,” Demare said afterwards. “The whole team moved up for me. They had to bring the breakaway back and set a really high pace.

“We had to do well getting through all the tight turns in the town but of course before the finish, everybody did a great job. Jacopo Guarnieri was fantastic. There he was for 400 metres and I was waiting. Then, in the end, I launched the sprint and I knew that people were trying to get around but I was strongest for the line.

“It feels amazing. Of course, I didn’t think I could get four stages here. I was looking for a stage win and I’m so happy. I really want to congratulate the whole team because it’s their victory as well. They believed in me, everyone has worked really hard and the work is paying off.”