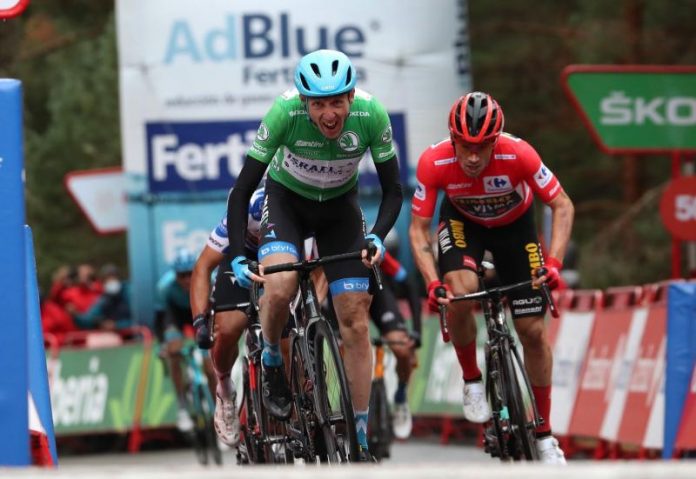 Daniel Martin claimed victory on stage three of the Vuelta a Espana as early race leader Primoz Roglic also put in a strong showing to remain in red on Thursday.

The 166km Lodosa to Vinuesa route featured two categorised climbs which ultimately decided the outcome of the stage.

Martin attacked in the last 200 metres of the final climb to Laguna Negra’s summit finish, holding off 2019 Vuelta winner Roglic and Richard Carapaz in the battle to the line.

“I’ve come so close to winning this year. I just really wanted to win a stage for this team because they’ve been so good to me,” the emotional Irishman said.

“Obviously with the (back) injury at the Tour (de France), I couldn’t win a stage but I was really determined to win today. The team were amazing, and every single one of them played their part in the victory.

“This win is partly for them and then partly for my wife, because this is the first time I’ve won a race since my kids were born and it’s really special.”

On another unseasonably rainy day, which started with the news that Thibaut Pinot had pulled out due to injury, there were multiple break attempts.

However, hopes of a surprise win were extinguished as the peloton reeled them in on the opening slopes of the final climb.

Esteban Chaves, part of the lead group, suffered a mechanical with just over four km remaining and his rivals made him pay as they pulled clear while he waited to change bikes and he has slipped to eighth in the overall standings, one minute 29 seconds adrift of race leader Roglic.

In a nip-tuck end to the climb, with gradients hitting double figures, several riders attempted to launch attacks but Martin’s well-timed move paid off as he claimed the stage win and cut Roglic’s overall lead to just five seconds.

Friday is the first day for the sprinters, with a 192km flat stage from Garay to Ejea De Los Caballeros in Zaragoza.