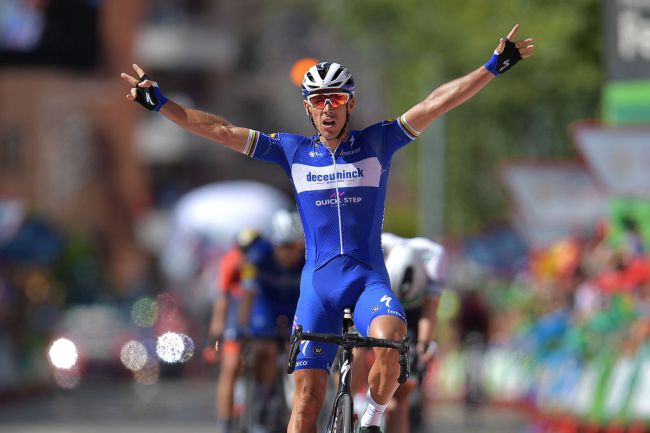 Philippe Gilbert claimed a second win at this year’s Vuelta a Espana on Wednesday as Primoz Roglic remained in the lead but with a new challenger.

Gilbert backed up his victory on day 12 in Bilbao with a powerful finish on the flat in Guadalajara to pip Sam Bennett (Bora-hansgrohe).

The trio were part of a breakaway group of more than 40 riders to escape in windy conditions just after the start of in Wednesday’s 17th stage. After aggressive riding on the longest day of this year’s Vuelta, 14 survivors finished more than five minutes ahead of the pack.

“It was a very special one. I think it’s the kind of stage that will stay in history, because of the way we rode. It was crazy from the gun,” Gilbert said.

“Sometimes on the flat we even went at 75kph. Throughout my career I have never done this. And that after 17 years,” he added.

Race leader Roglic finished in the main pack with most of the other general standings rivals, including Alejandro Valverde and fellow countryman Tadej Pogacar but was unhappy that his team had to spend the day chasing.

“I made a mistake,” said Roglic. “I shouldn’t have been in the position I was – I should have been totally in front. Maybe we lost the battle today, but not the war. It’s still looking really good,”.

Quick-Step placed seven of its eight riders in the breakaway which escaped in cross-tail winds. The team was rewarded with Gilbert’s 11th Grand Tour stage victory and with James Knox breaking into the top 10 of the overall leaderboard.

Gilbert’s patient work paid off in the final moments. Bennett, who had won two sprints earlier in the race, burst clear with 500m to go but, with 200m left, Gilbert took the lead and finished two seconds of the Bora-Hansgrohe rider.