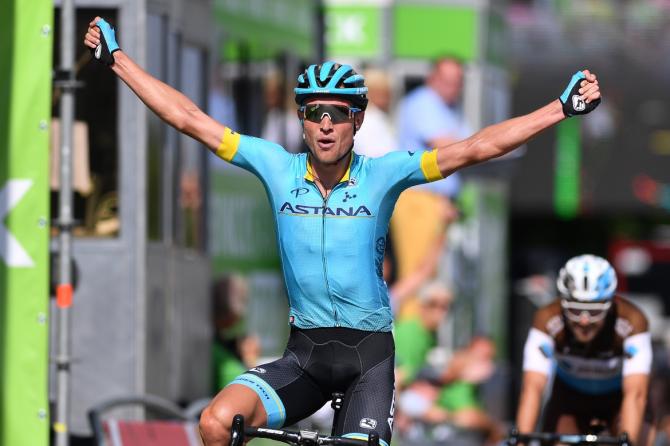 Today’s fifth stage of the Binck Bank Tour saw the breakaway ruin the chances for the sprinters once again as four riders arrived at the finish line ahead of the main peloton.

The longest stage of the tour at 207km saw an early group of four riders go clear with the peloton happy to let them hover three minutes ahead.

The day remained much the same from then on as the kilometres ticked down with the peloton controlling the distance to the four leaders, Julius van der Berg (EF Education First-Drapac), Magnus Cort (Astana),  Alexis Gougeard (AG2R) and Jonas Rickaert (SVB), never allowing them too much freedom.

It appeared that the peloton were eager to have a bunch sprint by not allowing the riders more of an advantage however once again the chase was left too late.

In the end, Magnus Cort claimed the stage victory with Caleb Ewan (Mitchelton-Scott) winning the bunch sprint for fifth place 33seconds behind and the general classifcation remains much the same.

“My directors looked strange at me when they came up in the car. They said: ‘what are you doing here? You’re supposed to do the lead-out for Riccardo Minali in the sprint.’. But now I’m here, with a win, it’s amazing,” Cort explained.

“It’s amazing. I didn’t really believe it when I first went in the break, but if you don’t try you’re not going to win. To be able to keep the gap to the bunch was amazing. Already they succeeded two days ago so for sure the sprint teams were aware. But maybe they allowed us ride too easy in the beginning, so we saved the legs for the last one hour and twenty, where we went full gas.”