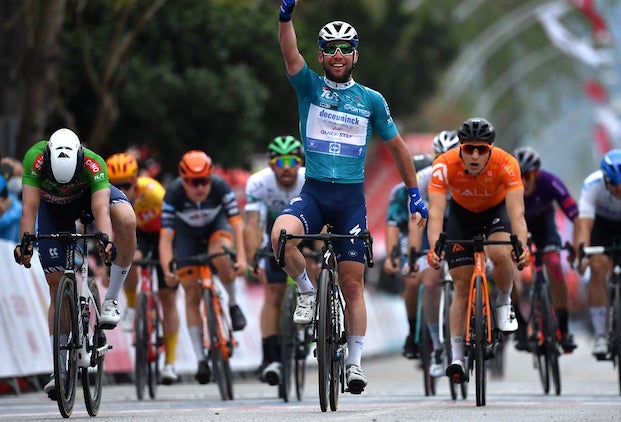 Mark Cavendish avoided a late crash to win a third consecutive stage at the Tour of Turkey on Wednesday to extend his overall lead.

The Briton hadn’t won a race since 2018 before Monday but was celebrating a third victory in three days after the 184.4km run from Alanya to the coastal town of Kemer.

Cavendish is now just one win away from his 150th victory after pipping again Jasper Philipsen to the line, while Stanislaw Aniolkowski was third.

“It’s nice,” Cavendish said. “It’s irrelevant how many wins are in a row, it’s just nice to win again. It’s nice that the team believe in me.

“The most special thing about today is to see how far into the stage Fabio [Jakobsen] got. I know that’s not nice for him to see the crash in the final. After the finish he was a bit shook up, but seeing him in and about in the sprint, really close, the pride inside me, I knew I had to finish it off.”

Cavendish has a 12-second lead over Philipsen ahead of Thursday’s 160km in-land run from Kemer to Elmali with a finish at 1830m altitude.