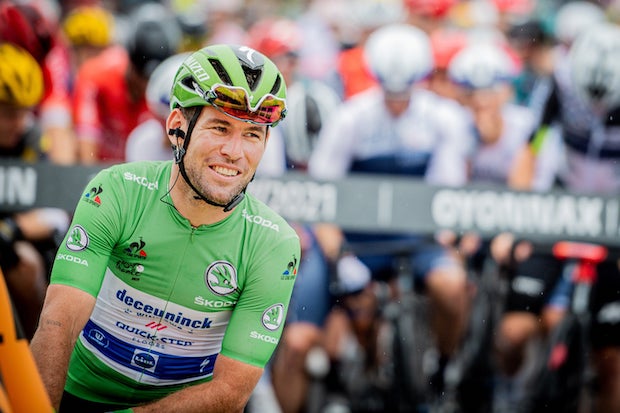 (AFP) – Mark Cavendish could walk away from cycling after crowning his career with the all-time record of Tour de France stage wins, his team boss Patrick Lefevere believes.

Cavendish himself credits Lefevere for relaunching his career after finding himself teamless in December on the back of a three-year barren spell and aged 36.

Seven months later, with two bunch sprint stage wins on the 2021 edition of the Tour, Lefevere says Cavendish might do well to think twice about extending his contract another year.

“We went for dinner in June and Mark told me he would like to extend his deal for a further year,” Lefevere revealed after his rider took his Tour tally to 32 stage wins, two behind all-time record holder Eddy Merckx.

“But after his wins, the scenario is completely different,” he said.

There are three more flat stages this week and two in the finals section which could be enough to give Cavendish the record.

“Imagine for a moment the dream scenario that he wins the (sprint points) green jersey on the Champs Elysees. Imagine he wins his 35th stage on the Champs Elysee. Well, maybe he would say ‘that’s it, it’s all over for me boss.’ I wouldn’t stop him leaving then,” said Lefevere.

“Because I have seen some riders who take it one year too far. Mark has another option now. He can go out on a high — and the choice is his,” said the Belgian.

“Mark was maybe a surprise, but he proved that a rider can always perform if he’s in a good mood and a good team. He made a lot of effort, it’s not by luck that he won.”

What Cavendish did was survive the cut-off and give himself a chance to win more stages on this Tour de France on a day other sprinters missed the time cut and were disqualified from continuing.

Cavendish believes his climb to the top of the Tignes slope may have been the greatest triumph of his glittering career.

He cried at the finish line as one of the last men to make it past the line before the expulsions began some 37 minutes after the winner Ben O’Connor.

“To have three teammates staying with me in the gruppetto for a horrendous stage, it’s been incredible,” Cavendish said with conviction.

“If we stop now, it will be one of the most wonderful Tour de France stages I’ll ever have had,” Cavendish said on Monday of the challenging climb to ski-resort Tignes on a freezing stage nine.

“I’m so humbled and physically broken,” said Cavendish. “This is the one stage I was afraid of.”

There are likely sprint finales on Tuesday, Thursday and Friday where Cavendish faces even less competition than the first week, with several sprinters, including Arnaud Demare, amongst the time-cut victims Sunday.