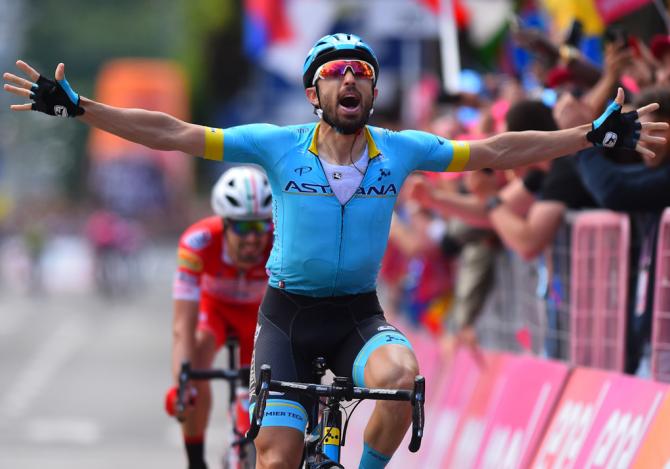 Dario Cataldo (Astana) has won the 15th stage of the Giro d’Italia on a nightmare day for race favorite Primoz Roglic (Jumbo-Visma).

Richard Carapaz, the overall leader, finished 11 seconds behind with Simon Yates and Vincenzo Nibali, but Primoz Roglic, who came off his bike on the final descent, lost 40 seconds to the Ecuadorean.

While Cataldo and Mattia Cattaneo (Androni Giocattoli-Sidermec) played cat and mouse up the final straight for the stage victory, the heavyweight contenders were fighting a desperate battle for seconds behind them at the end of the 232-kilometre stage.

Nibali attacked throughout the closing stages and only Carapaz and two Britons, Yates and Hugh Carthy (Education First), managed to stay with the Italian. They finished just 11 seconds behind Cataldo. Yates snatched third to pick up a four-second bonus.

“I wanted to see how the others responded,” Nibali said at the finish adding he was happy he was “able to do something.”

Carapaz increased his lead to 47 seconds over Roglic. Nibali is another minute further back in third.

“Among those in contention for the victory, there is also Carapaz,” the Ecuadorian said but accepted Nibali had taken the initiative on the stage. “It was a mistake, on my part and on Roglic’s part, to give him so much space.”

“I think he’s very strong,” Carapaz said. “I think I’m going to be seeing a lot of him this week. We both want to finish on the podium, so it should be quite a spectacle for the people watching on the TV.”

Roglic, who started the day seven seconds behind Carapaz, rode into a barrier taking a corner too wide as the contenders took terrifying risks on the final descent. He had to exchange bikes with a team mate and came in 51 seconds behind the winner in a trio that also contained Trek-Segafredo’s Bauke Mollema.

Tuesday’s 16th stage is a potential turning point in the race as it features the gruelling ascent of the Mortirolo pass, even if the climb up the equally demanding Gavia pass has been cancelled because of avalanche risks.