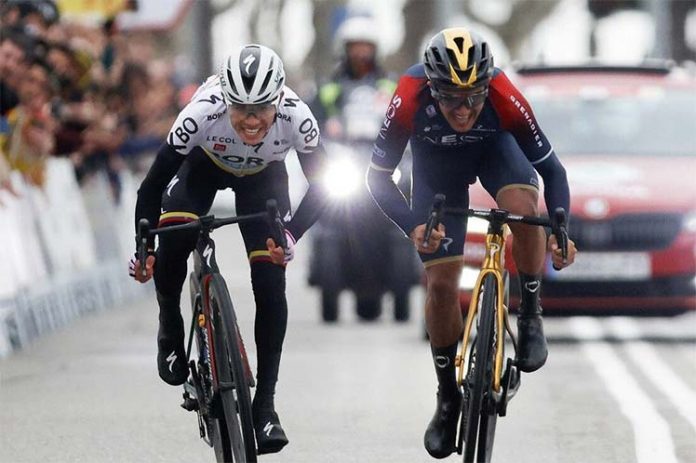 Sergio Higuita took the lead in the Volta a Catalunya on Saturday despite finishing second to Richard Carapaz after a long two-man breakaway.

The two South Americans broke away from the peloton 130 kilometres into the hilly 168km stage.

With the other teams unwilling to mount an organised pursuit on a cold and rainy day, Higuita and Carapaz built a lead of three-and-a-half minutes. After they had worked together for most of the day, Carapaz won a furious final sprint for the line in Cambrils.

“At the start, we had a plan to attack on the first climb because we knew the hardest part was early on, and we knew if the peloton got over that intact then there would be little chance of us staying away and it could all come down to a sprint,” Carapaz said.

“So we went for it early on and whoever came with me, came with me. Higuita and I collaborated well and that was what allowed our break to stay away.”

Higuita, who started the day in third, took the overall lead while Carapaz leapt to second, 16 seconds behind.

Joao Almeida, who started the day in the lead, slid to third at 52 seconds ahead of a testing final day in Barcelona which includes six climbs of Montjuic.