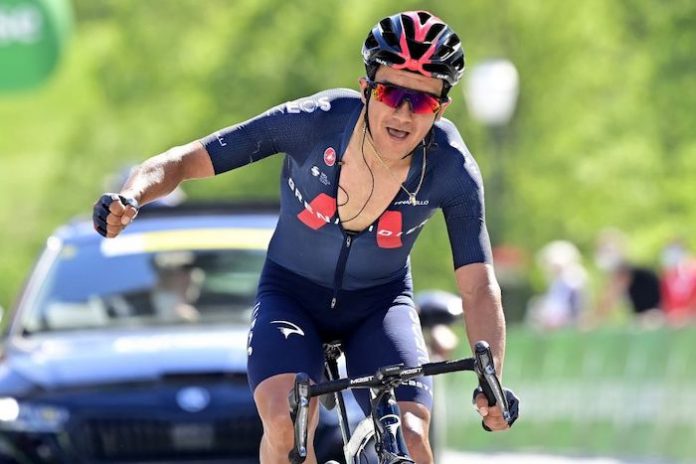 Richard Carapaz won stage five of the Tour de Suisse on Thursday to take the overall lead in the race at a summit finish at Leukerbad.

You can rewatch STAGE 5 of 2021 Tour de Suisse HERE

In a statement of intent for the Tour de France which starts in two weeks, Carapaz showed dazzling form to seize the overall leader’s yellow jersey with a gutsy stage win.

The 2019 Giro d’Italia winner caught Jakob Fuglsang on the final ascent and edged a two-man dash for the line. Thanks to his stage win, Carapaz now leads the race by 26 seconds from Fuglsang, with world champion Julian Alaphilippe in third at 33sec.

“I’m really happy. It’s something we’ve been working on all week,” Carapaz said after the stage. “We knew it was a special day. We wanted to think about the general classification of course and the possibility of winning a stage was there. I did both so I’m happy.

Ineos have yet to name their final line-up for the Tour, but Carapaz as co-captain with Geraint Thomas looks likely.

Mathieu van der Poel started the day in yellow after two stage wins so far and attacked from 155km out, only giving up the fight 30km from the line.

Alaphilippe was unable to follow Carapaz when he made his move on the penultimate climb but crossed the finish line 37sec adrift of the winning pair.