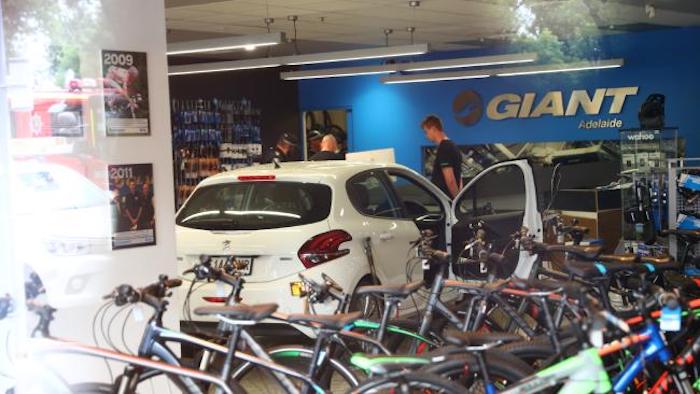 A car has crashed into a Giant bike shop in Adelaide, Australia,  causing up to $100,000 of damage.

The driver, in his 80s, said he was parking when he hit the accelerator rather than the brake, mowing down a metal bollard, the glass sliding door and 20 high-end mountain bikes worth $150,000 at the front of the store. A female staff member narrowly jumped out of the way before the car smashed into the front counter.

“Unfortunately (the driver) thought the car was in reverse but the car was in drive, he’s accidentally stepped on the accelerator rather than the brake,” Superintendent Craig Wall said.

“Luckily there weren’t many shoppers this time of day after Christmas and New Year.”

“I opened up the car door and the elderly gentleman was there with his foot still flat to the floor,” store manager Sean Reynolds said. “The wheels were just spinning up against the counter.”

“I reached in to turn the ignition off and take his foot off the accelerator but didn’t know where the rest of our staff were.”