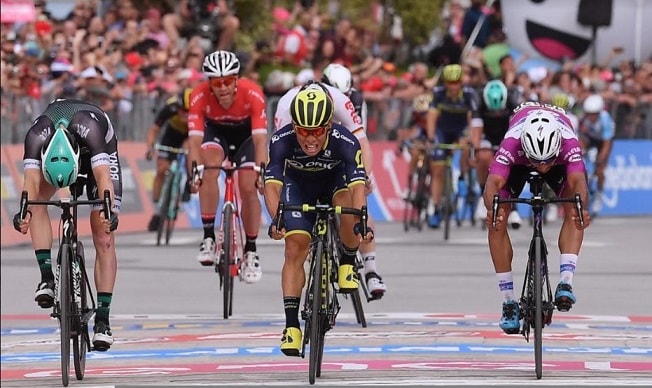 Despite a lumpy start and finish, stage seven of the Giro d’Italia offered another opportunity for a bunch sprint into Alberobello.

Just three riders rode into the breakaway, before it shortly dropped down to just two, making the long 224km stage more simple for the sprint teams to control.

Orica-Scott shared the duties at the front of the peloton with Quickstep Floors and Lotto-Soudal and the gap never reached four-minutes.

As the race approached the technical and complicated finish, the intensity stepped up as outfits tried to keep their leaders in front and out of danger.

The race was back together with 14km to go and Orica-Scott hit the front.

After a final lead out from Mezgec, Ewan launched early to navigate the most direct line to the finish, just holding onto the victory in a final lunge.

“This win has probably brought me more joy than any other,” Ewan said at the finish. “Everyday I didn’t get a win, I felt the pressure build so to finally get the victory it feels pretty good.”

WOW!!@CalebEwan wins stage seven by a nose after an thrilling three-way sprint for the line #Giro100 pic.twitter.com/ZxmjbYZmMZ