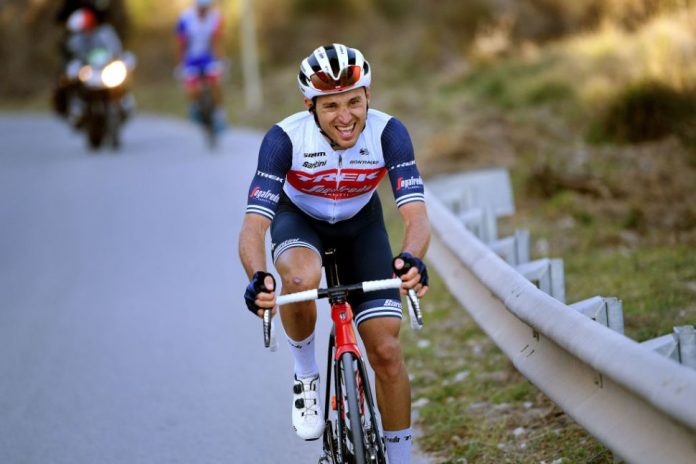 Gianluca Brambilla (Trek-Segafredo) was the strongest in the final day of racing at the Tour des Alpes Maritimes on Sunday, claiming both the stage win and the GC with after a solo attack in the final 11 kilometers.

The last stage took the peloton through a 136-kilometre route with a start and finish in Blausasc, that featured three climbs of the first category. The Italian rider -who started the day in the 17th GC position at 13 seconds from the then leader Michael Woods- was part of a leading group of 16 men and managed to drop them all along the challenging course of the day and crossed the line by himself, 13 seconds ahead of Tao Geoghegan Hart, Ben O’Connor, Rudy Molard and Valentin Madouas.

A second group, that included the two first men of the classification after the second stage -Woods and Bauke Mollema- arrived to the finish line 18 seconds behind Brambilla, which wasn’t enough to take the first spot of the final podium.

This is the first race of the season for the Italian, who from here will start at the Trofeo Laigueglia, Strade Bianche and the Volta a Catalunya, before focusing on the Giro d’Italia.

“I want to say thanks to John Burke and Luca Guercilena at Trek, they always believed in me in the past year, even if something difficult happened I always gave 100 percent,” Brambilla said. “I think this is the way to pay them back.”