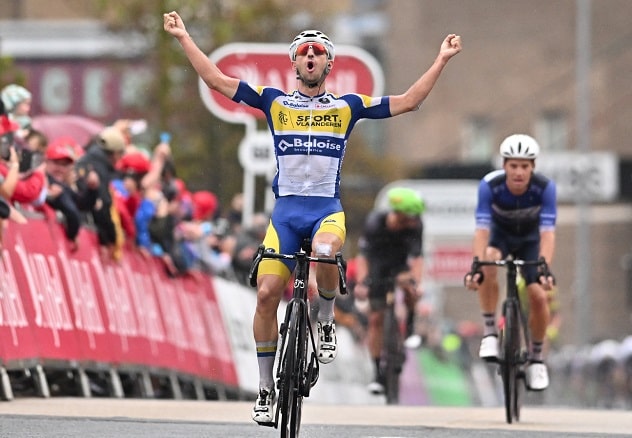 Kamiel Bonneu claimed the biggest victory of his professional career as a four-rider breakaway group ripped up the script on stage three of the Tour of Britain in Sunderland on Tuesday.

There was added drama as Corbin Strong was initially awarded the leader’s jersey for a third day before the UCI commissaires panel reviewed their decision almost two hours after the conclusion of the stage.

As a result, Perry takes a seven-second lead over Strong, with Paasschens a further four seconds back.

“We are a small team, we don’t win that much. So it’s always nice to get a win and especially in stage race like this. I think it’s a really nice stage race – it’s really awesome to win.

“We discussed at the beginning of the stage that Mathijs and the guy from [Wiv] SunGod would go back after the third sprint because they were really close in the GC. But then we had such a big gap that they said ‘we’re not going to go back.’ I completely understood them, but Richardson said ‘Okay, if you’re not going to keep your promise then I’m not going to work with you!’ It’s his decision and I don’t mind because I won.”