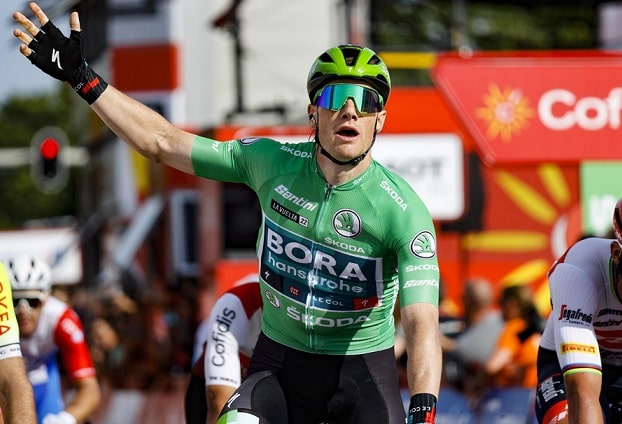 Sam Bennett clinched his second stage victory in a row by winning stage 3 of the Vuelta a Espana on Sunday, a 193km trek that started and finished in Breda.

Bennett, who also won the second stage in Utrecht, was the fastest in the bunch sprint finish in the last stage on Dutch soil. The Irishman finished ahead of Trek-Segafredo’s Mads Pedersen, as was the case in the second stage, and Dan McLay of Arkea-Samsic completed the podium.

Bennett, who became the second Irish rider to win at least 10 stages in Grand Tours after Sean Kelly, was guided to the line by his team mate Danny van Poppel.

“It was quite hard because a lot of people were fighting for our wheel,” said Bennett, who leads the green jersey race on 117 points to Pedersen’s 80. “It was just the natural flow that people went up the side and squeezed me off, so there were a few tough moments to hold Danny’s wheel. It was a hard fight.”

Sunday’s stage was largely uneventful except for a crash for general classification favourite Richard Carapaz with around 18km to go. The Olympic road race champion was brought back to the peloton by his team mates.

Edoardo Affini will take over the red leader’s jersey for stage four, becoming the third Jumbo-Visma rider to do so after Robert Gesink and Mike Teunissen.

The peloton moves to Spain on Monday. The following six stages before the next rest day will be raced in medium or high mountains of northern Spain, in the Basque Country and Asturias.