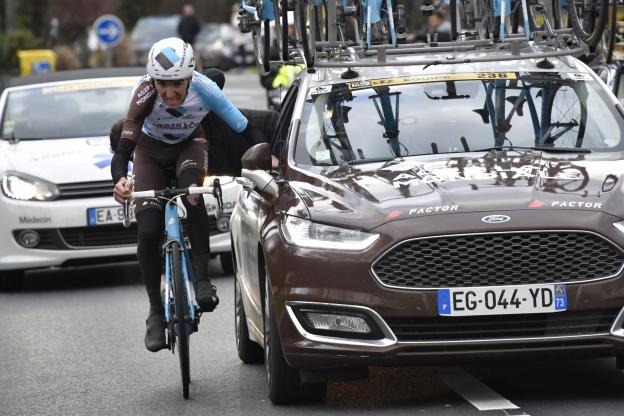 Romain Bardet has been disqualified from the Paris-Nice after being towed by his team car following a crash on the opening stage.

When the crosswind split the peloton, Bardet found himself in the fourth group on the road. He was able to join the group containing most of the GC riders but the French rider fell off his bike with about 23 kilometers left and made his way back to a group of chasers by breaching the rules on team car assistance.

Bardet took too many illegal tows, of which was captured by the TV helicopters.

“We made a mistake, which is the fruit of a lack of clear focus. I am very sorry because nothing justified the assistance of the team car for that,” Bardet said.

“There is a now a safeguard against a practice too often tolerated in the peloton. I sincerely apologize to organizers and to the public.”

The wind-hit stage was won by Arnaud Demare (FDJ) as Alberto Contador’s chances of winning a third Paris-Nice title took a hit when he fell behind. The twice Tour de France champion was trapped behind with Richie Porte (BMC) and Bardet when crosswinds split the peloton and he lost further ground in the finale.

You can follow Paris-Nice LIVE every day at Cycling Today.