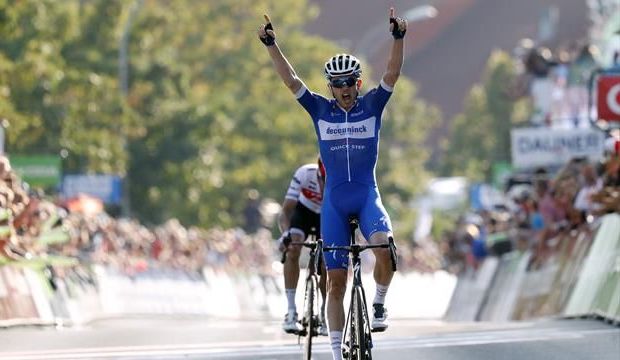 Kasper Asgreen claimed victory on the third and penultimate stage of the Tour of Germany in Eisenach on Saturday as Jasper Stuyven grabbed the overall lead.

Asgreen, who won the Tour of California in May, edged out Stuyven after the pair had broken clear near the end of the 189km ride from Goettingen.

The Deceuninck-Quick-Step man and Stuyven finished 17 seconds ahead of a group of 15 riders.

Julian Alaphilippe led for long periods on Saturday with Mads Pedersen before the duo were caught 25km from the finish.

“We protected Jasper as much as we could on the penultimate climb and then he was in the 25-rider group to get in with Asgreen,” said Stuyven’s teammate Julien Bernard. “For tomorrow, it’s going to be a big fight.”

Sunday’s final stage keeps the peloton in the Thuringian forest with an undulating course to Erfurt.