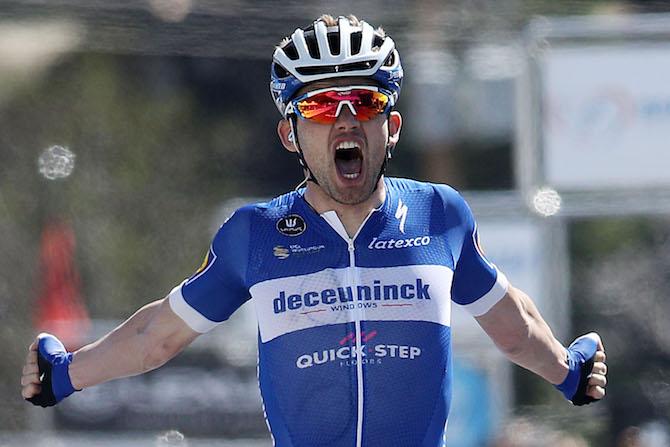 Kasper Asgreen (Deceuninck-Quick-Step) held back as Tejay van Garderen (EF Education First) shredded the remnants of the breakaway on the final climb, then swung past him to win the second stage of the Tour of California.

Van Garderen wound up being the big winner anyway. The American rider put serious time into the other overall contenders with his gritty push toward the finish line near Lake Tahoe. He wound up slipping on the leader’s jersey by six seconds over Gianni Moscon with Asgreen another second back in third place.

”Feels great,” said van Garderen, who won the overall race in 2013 but has weathered plenty of ups and downs in his career since that point. ”I mean, it came as a bit of a surprise. I just would have assumed Kasper would have taken the jersey on the back of his stage win. I don’t know what happened to him yesterday. But it’s quite a surprise.”

Van Garderen predicted that many riders would sleep on the 133-mile (194.5k) second stage with higher elevations still to come in the week-long race. The ride began in Rancho Cordova and took riders to the Heavenly Ski Resort, a well-known finishing stretch for the Tour of California.

But the long, lumpy stage still took riders to altitude after a pancake flat opening stage around downtown Sacramento, and it quickly shredded the peloton on a long day in the saddle.

Eventually, a selection of 10 riders broke away from the field to contest the final climb.

Astana’s Davide Ballerini was the first to attack at the base of the mile-long final climb, but he was quickly reeled back. Van Garderen then stood up in his pedals and dropped four riders from the last group, then stood again and sent three more riders off the back.

”I made the initial attack and usually if they have the legs they’ll jump over me,” he said. ”I kept looking back and when they didn’t jump I thought, ‘OK, they might not have the best legs.”’

Moscon pulled slightly ahead on a brief flat section, then van Garderen attempted to kick one more time heading into the final corner. But after laying back throughout the climb, Asgreen summoned just enough strength to power ahead of his American rival to claim the stage win.

”It was a little longer than I wanted it to be and I had to go all the way to the line,” he said of the finishing kick. ”It’s my first pro win so I’m very happy right now, and to take it on a stage like this, I’m really happy with it.”

Asgreen got a 10-second time bonus for his first WorldTour win, while van Garderen’s runner-up finish gave him a six-second bonus – time that could prove crucial on the stages still to come.

The third stage Tuesday takes riders 126 miles (207k) from Stockton to Morgan Hill, and includes about 10,000 feet (3,048m) in additional climbing. It also includes a climb up Mt. Hamilton late in the stage, then a quick, tense descent to the finish line.