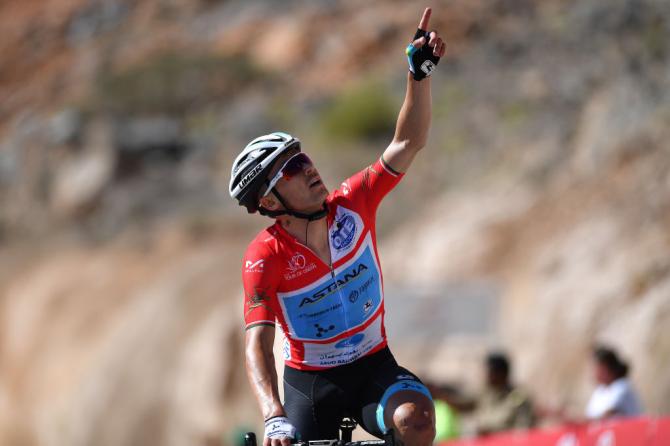 Alexey Lutsenko (Astana) claimed his second consecutive victory and his third in this year’s edition by winning the fifth stage of the Tour of Oman today.

The 26-year-old Kazakh was overcome with emotion after pointing with both hands toward the sky at finish on Green Mountain.

“First of all, I want to dedicate this victory to my wife, who had a miscarriage of our twins last December,” said Lutsenko. “The team supported me all the time in this period, and I’m happy I can reward them as well for this support.”

With one hilly stage to go, the red jersey is now even more firmly on the shoulders of Alexey Lutsenko, who is set to win the Tour of Oman for the second consecutive time.

Lutsenko takes a 44-second overall advantage over Domenico Pozzovivo (Bahrain-Merida) and a 47-second edge over Jesus Herrada (Cofidis) into Thursday’s sixth and final stage of the race.