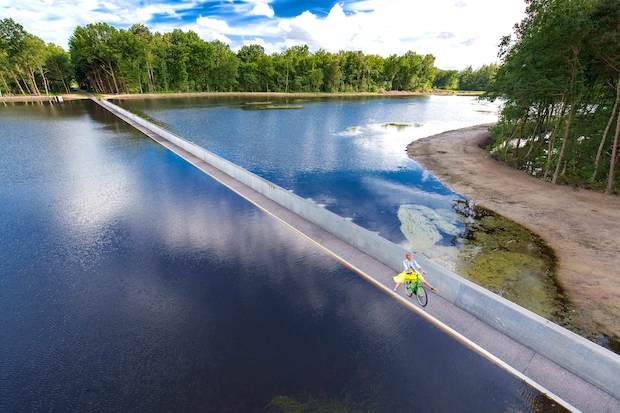 Cycling Through Water, Belgium’s sunken cycle bridge, has made Time magazine’s Greatest Places list for 2018. The annual list includes unique and awe-inspiring sites around the world.

Is almost to be taken literally: a cycleway, 212 meters long, crosses a lake, but dipping in the water instead of going above it, always dipping in deeper until the cyclist is at eye level with the water surface.

Limburg province wants to retain its reputation as a cycling hotspot in Belgium – it has some 2,000 kilometres in cycleways at present.

Limburg is working on a giant ring-shaped cycleway which takes you to the tops of the trees in Hechtel-Eksel, on an underground cycling experience in the Riemst caves and a special cycle bridge in the Kempen area.

Cycle through water in Belgium

Ever cycled through a pond before?!