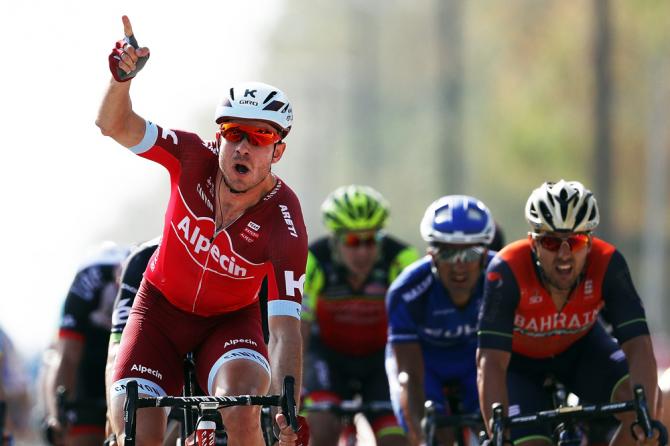 Alexander Kristoff (Katusha-Alpecin) survived a series of climbs to sprint to victory in the fourth stage of the Tour of Oman. He finished ahead of Sonny Colbrelli (Bahrain Merida) and Greg Van Avermaet (BMC).

After the tough stage to Quriyat and on the eve of the decisive climb of Jabal Al Akhdhar (or the Green Mountain), day 4 of the Tour of Oman was almost as demanding. Taking off from the resort of Yiti (Al Sifah) just by the sea, the peloton went up and down all day. A total of five difficulties were on the course of this short 118-km stage including three in the last 40kms.

“We knew it could be a sprint with a selected group. The last years I was dropped but we were determined to go deep. We wanted to go all the way to finish. It was not easy at all as I was dropped again on that last climb but the teammates did an amazing job. First of all, they stayed with me all day, but later they managed to pull it back for me. It was fantastic what Rein Taaramäe, Marco Haller and Reto Hollenstein did till the end. Without them I would never have been able to win. We managed to come back and then it was just to me to finish the job in the sprint. It is cool to win like this. This was a real team effort. It cannot get better”, said Alexander Kristoff.