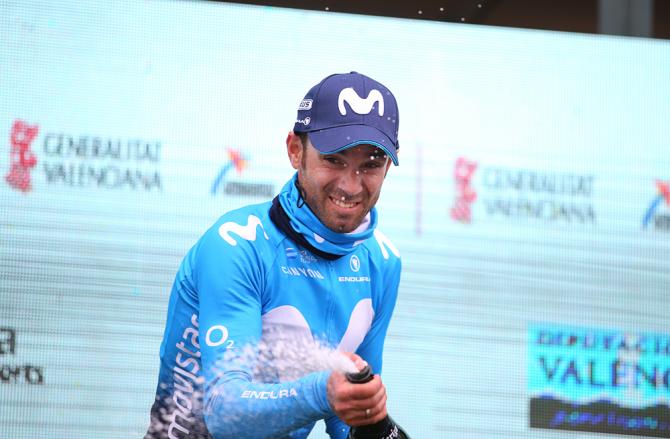 After 215 long days of suffering after his crash and serious leg injuries on stage one of the 2017 Tour de France, Alejandro Valverde got back to winning ways on Thursday.

The Spaniard claimed honours on stage two of the Volta a la Comunitat Valenciana, 154km from Bétera to Albuixech, with a display of power on all terrains which also awarded him the yellow jersey as provisional GC leader.

Valverde split the main group with a brutal acceleration with two kilometers before the summit of Garbí –the final Cat-1 ascent of today’s route, 31km from the finish– and crested it alongside Dane Jakob Fuglsang, a handful of seconds ahead of a peloton from which Luis León Sánchez jumped across into the downhill.

Cooperation was perfect into both the descent and the flat after the climb, and despite furious attempts by Sky and BMC to bring the gap down, the trio reached the finishing straight together and ahead, with Valverde completing his exhibition with a superb sprint for his 109th pro victory.

“At the Garbí climb I was feeling like I had good legs and decided to attack, profiting from the fact that Fuglsang had moved meters before”, said Valverde.

“Luisle bridged back into the downhill and we really got on well with each other afterwards. That good cooperation and the fact that we three were all strong riders made it possible to reach the finish, even if Sky and other squads pushed with all they had. Surprised? Well, I was feeling great training before the first races, and last week in Mallorca I saw I was on the pace of the strongest ones and knew that it’d be possible to try and win a stage here. I got this chance and didn’t want to wait for another one – the sooner the better. It makes me so, so happy to get this victory after everything I had to go through during the last few months. The seconds we put on the rest today might become decisive, too. It’s not a bad TTT for us tomorrow, but it’s a dangerous one, so we must stay focused as well as cautious, trying to lost not too much time so we can stand a chance on Saturday. Let’s see what we can do after today’s win and tomorrow’s result.”