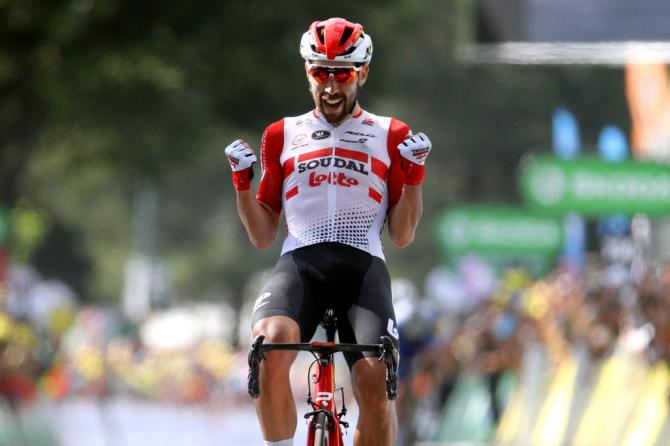 The last French rider to be in yellow for July 14 fireworks was Tony Gallopin in 2014.

“Tomorrow is a very special day for the French people, and for me too,” said the 27-year-old.

French duo Alaphilippe and Thibaut Pinot appeared to work together on the closing section of the last of seven climbs, which will not have escaped the French public.

“I went for it on the last climb and then I saw Thibaut. We looked at each other and we just knew, we didn’t even have to speak,” said the overall leader.

“He had his interests and I had mine, but it was a moment of great beauty,” said Alaphilippe, who leads champion Geraint Thomas by 1min 12sec.

He laughed off an accusation that he had ridden behind a motorbike to pick up slipstream speed.

“I climbed on the back of the motorbike with my bike, it was very fast,” he scoffed. “No way,” he then said firmly.

Two hours later Alaphilippe, described by Geraint Thomas as “the darling of France” was still posing for selfies with an adoring public at the former mining town better known for the soccer club Saint Etienne, once led by French football great Michel Platini.

Thomas survived a spectacular fall with several of his team involved. He now also trails title rival Pinot by 19 seconds in the overall standings.

Alaphilippe originally took the overall lead on stage three with a gun-slinging solo break. But he lost it to  Giulio Ciccone at the Planche des Belles Filles mountain slog on Thursday.

Ciccone looked ashen-faced in his desperate pursuit of the French duo, but can console himself with the best young rider’s white jersey and second place overall.

Sunday’s ninth stage will doubtlessly see the French public roll out a yellow carpet for Alaphilippe as his popularity burgeons.

The national holiday test is a 170 kilometre ride from former mining town Saint Etienne to Brioude, Romain Bardet’s hometown, and the AG2R man has sworn to fight back after dropping over two minutes so far in the overall.