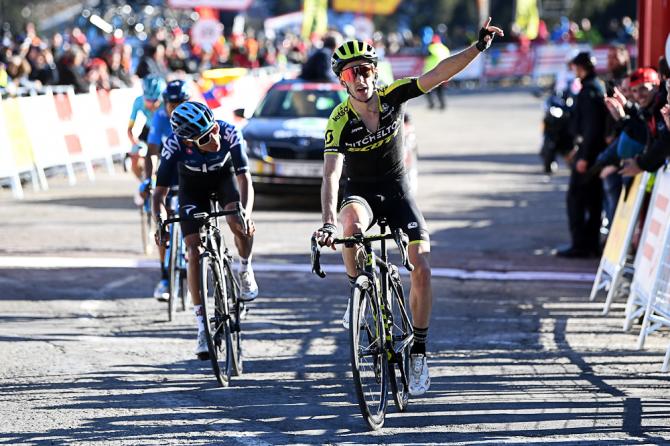 Adam Yates (Mitchelton-Scott) won the first summit finish of 2019 Volta a Catalunya on Wednesday as he emerged victorious from an elite group of five on the ski resort Vallter 2000.

After a 12km climb to an altitude of 2,150m, Yates had the legs to edge Egan Bernal (Team Sky) in second, Daniel Martin (UAE Team Emirates) in third, Movistar’s Nairo Quintana in fourth and Miguel Angel Lopez (Astana) in fifth.

“I had the best legs in the final section,” said Yates, who suffered a gut-wrenching one-second defeat at the Tirreno Adriatico last week.

“There’ll be more of the same tomorrow. There’s plenty of time to get the overall lead here.”

Yates appeared impressively strong when he chased down Bernal and Quintana as the drama unfolded towards the narrow, pine-forested peak as Martin and Lopez joined in the fight for the hotly-contested five-way shoot-out.

It was Bernal and not Chris Froome that led Sky’s assault of the final climb with the four-time Tour de France winner saying he was now supporting the 22-year-old after his heavy fall on Tuesday.

“Yates is really strong, we’ll need to keep an eye on him,” Bernal said. “We are more than happy with that (result), it was a tough stage today. Tomorrow will be the same and we’ll go for it again.”

Thomas de Gendt held on to the overall lead by 27 seconds on Yates, after starting the day 2min 48 ahead thanks to his opening stage breakaway win, with Bernal at 30, Martin at 33, Quintana 35 and Lopez at 39.

UAE Team Emirates features three category one mountains, albeit with an easier final stretch from this stage’s ultra-steep finale.