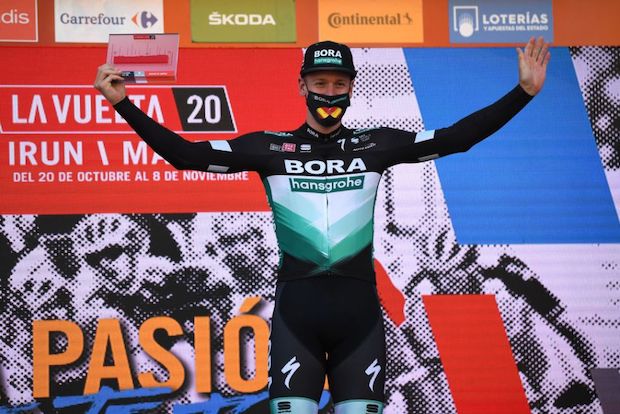 Pascal Ackermann won stage nine of the Vuelta a Espana on Thursday despite finishing second behind Sam Bennett, who was relegated for shoulder barging an opponent twice in a highly disputed end to the race.

Bennett edged out Ackermann in the bunch sprint at the end of the flat 157km stage from Cid Campeador. Castrillo del Val to Aguilar de Campoo and celebrated as he crossed the line but the victory was snatched away as footage showed him barging Trek-Segafredo’s Emils Liepins.

There was no change to the general classification and Richard Carapaz maintained his overall lead, as second-placed Primoz Roglic quickly recovered from a punctured tire to cross the line with other overall contenders.

Patrick Lefevere director of Deceuninck–Quick-Step team, raged against the decision on social media but Ackermann felt justice had been done. “It wasn’t a fair action from him (Bennett). I think, after all the crashes in the last week, we have to take care of the other guys,” said the German.

“I feel sorry for Sam, but now we have to ride more fair. I’m really happy about this victory and also for my team, they did an awesome job today, they did it all from the front and I’m happy to give something back to them.”