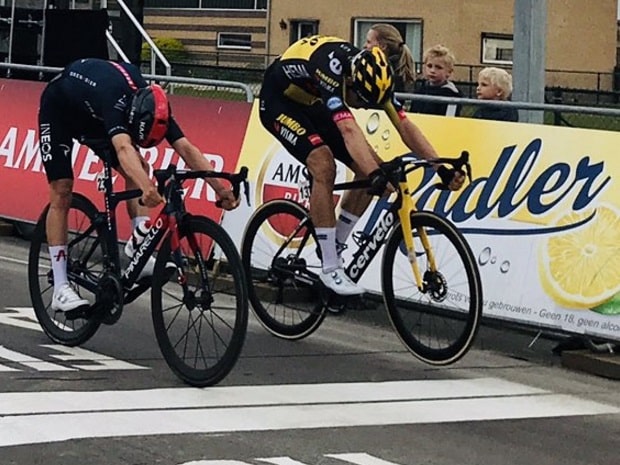 The Amstel Gold Race is an exciting race on the hilly roads of Southern Netherlands. It features 30+ short climbs among which the Cauberg is often the focus of drama. The roads are narrow and sadly the race is often accident prone.

Top 10 of the last two editions

Lulu says: Mathieu Van der Poel is a previous winner and obvious selection and on imperious form this year.

Tom Pidcock, second last year and he was strong at Dwars Doors Vlaanderen.

Valentin Madouas, was strong at Ronde and will carry French hopes.

Michael Matthews, is no stranger to the Amstel Gold Race and this race suits him well.

Benoit Cosnefroy, was strong in Circuit de la Sarthe and avoided the last stage carnage for a satisfactory second in general classification.

Fred Wright, has to be considered because of an outstanding ride in the Ronde.

Tiesj Benoot & Christophe Laporte are in great shape and have been knocking at the door in recent weeks and both have the quality to win this race.

Jan Tratnik – Been consistent since Milan-Sanremo with 9th at MSR and Dwars door Vlaanderen & 12th at Ronde.

Special mention by mufcfaan: Magnus Sheffield: At 19, he surprised all the big favourites by a spring attack in Andalucia, could repeat his feat.

Bahrain will throw the dice and see which number comes out with Mohoric, Wright, Teuns, Tratnik and Jack Haig.

Weekend forecasts suggest there may be rain in the early afternoon that will decrease as the race progresses. With temperatures set to be in the region of 12 degrees and winds at 15 kms/h, conditions should be perfect for great racing.

The bookie’s view is clear: Van der Poel is available at shorter than 2/1 . They see the main threats as Pidcock at 5’s and Matthews at 8’s. Other contenders range from upwards of 18’s so there must be some value there somewhere. Michael Valgren, the 2018 winner was 13th here last year and six seconds behind Pidcock last week in the Tour de Flandres. At 40/1 he might represent value for a podium finish.

Mavi Garcia – 6th last year and more vertical meters so will do well.