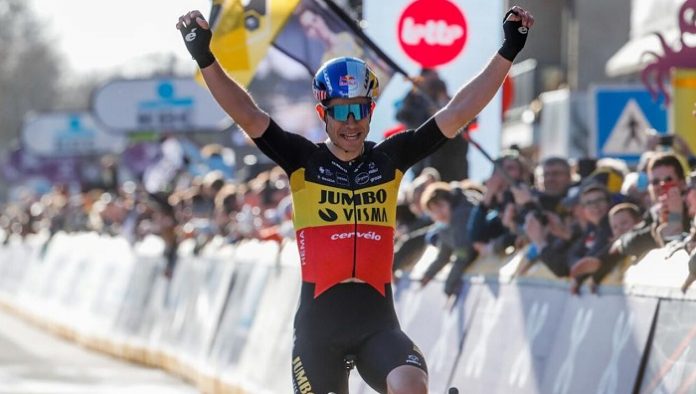 Wout van Aert opened the classic season by surging away from a powerful pack to win Omloop Het Nieuwsblad on Saturday.

Van Aert attacked with 13 kilometres to go at the foot of the Bosberg, the last climb. A star-studded leading group hesitated before giving chase but even when they organised a pursuit, Van Aert continued to power away from them.

“I didn’t think I was in such good shape already,” he said.

He finished 22 seconds ahead of Sonny Colbrelli who edged Belgian pair Greg Van Avermaet and Oliver Naesen in a sprint for second.

“Considering what Wout showed today, his phenomenal power, second place was the best I could achieve,” said Colbrelli.

Another Belgian, Victor Campenaerts, was fifth, even though he twice had to scramble to catch up to the leaders after a crash and swapping his bike.

Van Aert said he was targeting the first two monuments of the season: the Tour of Flanders and Paris-Roubaix.

“My big goals are in a few weeks. But winning this early in the season is already a nice bonus.”