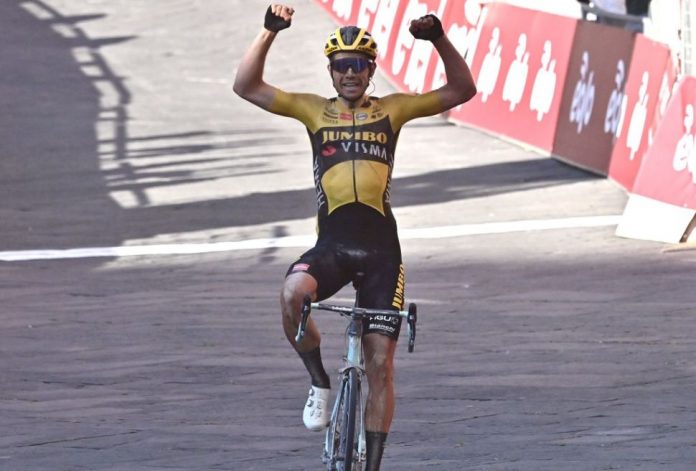 Wout Van Aert triumphed in the heat and dust of Italy as top-level cycling returned after a five-month absence at the Strade Bianche on Saturday.

The Jumbo-Visma rider, who had finished third in the previous two editions, attacked in the final 13km of the 184km race, crossing the line alone on Siena’s historic Piazza del Campo.

Davide Formolo (UAE Team Emirates) was 30 seconds behind with Maximilian Schachmann (Bora-hansgrohe), a further two seconds adrift in third, after nearly five hours in the saddle with temperatures hitting the high 30s Celsius.

“Over the last two editions of Strade Bianche, I gained a lot of confidence,” said Van Aert. “It’s never easy to win and it was harder than usual in today’s circumstances.

“It makes the win even better. This is proof that I’m at the highest level now. To have won Strade Bianche at the age of only 25, with a cyclocross background is a huge achievement.”

Vincenzo Nibali crashed with Peter Sagan also among the many riders who failed to finish the gruelling race.

Earlier in the day, Annemiek van Vleuten won the women’s race on the famous white dirt roads for the second year in a row.

The 37-year-old Mitchelton-Scott rider crossed 22 seconds ahead of Margarita Garcia Canellas of Ale BTC Ljubljana with the Spaniard having led for much of the 136km race through the rolling hills and white gravel roads of Tuscany.