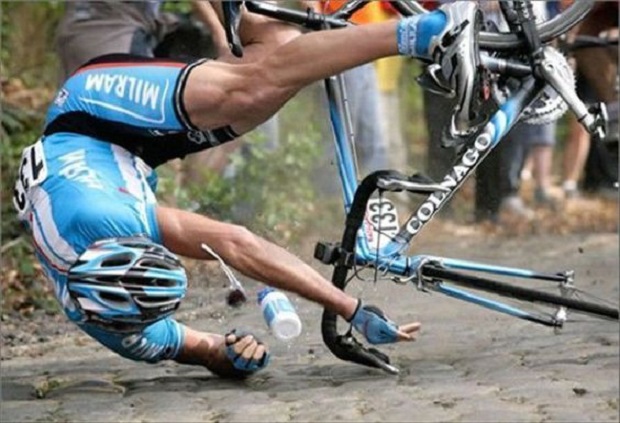 Cycling is a sport that mixes tragedy and triumph like few others. While there is perhaps no greater joy in the sport than a solo victory, there is no greater pain than that of a high-speed crash.

Nowhere is this more evident than in the Tour de France. Pushing their bodies to the limit, cyclists from all over the world choose to walk the fine line of danger and reward, sacrificing their bodies for the chance to make history. Unfortunately, not all of their stories have a happy ending. Here are seven of the Tour’s worst crashes that are every bit as infamous as the race’s greatest victories.

While this crash was nowhere near the most bloody, most fans watching the 1999 Tour de France were completely horrified when Giuseppe Guerini slammed into a photographer near the top of Alpe d’ Huez. Guerini was closing in on the victory of his career atop the most iconic climb in cycling when a man jumped in front of him to take a picture. There was nowhere for Guerini to go, and he ended up on his backside with the pack closing in. It was a moment that made your heart sink for the Italian, but luckily his adrenaline kicked in and Guerini was able to win the stage.

It’s customary during the Tour de France to have officers standing by on the sidelines of the race. But during this insanely fast sprint during Stage 2 of the race, riders were hitting speeds faster than 60 KMPH.

An officer decides it’s a good idea to spend some time checking out the view, standing on the sidelines, completely not expecting riders to be booking it around the corner, towards him. Coolest part: the officer who saw all this happen and reacted less than a second later by jumping into the crowd to avoid the cyclists in panic.

If only the other guy had those kinds of reflexes. It didn’t terribly hurt the officer, but the rider involved was never the same cyclist again.

Hinault was the cherished champion of French cycling in the 1980s. In 1985, he was aiming for his fifth Tour win. Only two other riders, Jacques Anquetil and Eddy Merckx, had accomplished this feat.

His dreams were nearly crushed when he went down in the last kilometer of Stage 14, landing on his head and breaking his nose. Heroically, Hinault got back on his bike. A trail of blood followed him to the finish line, and he went on to win the Tour.

Cars will always be a cyclist’s biggest enemy. With 36km to go in the ninth stage of the 2011 Tour de France, Johnny Hoogerland was side swiped by a rival’s team car. As bad as that may sound, the collision wasn’t where the damage occurred. Hoogerland and Spaniard Juan Antonio Flecha were sent flying into a barbed-wire fence. The blood and gashes on Hoogerland’s legs looked like something out of a WWII movie. Years later, Hoogerland is said to still suffer from back pain, mood swings and insomnia as a result of the horrific incident.

As you’ll learn through your experience on this list, a lot of these falls don’t look too bad, but keep in mind the speed at which they’re going. It’s basically like being thrown out of a car wearing only thin shorts and a helmet.

But really, the worst part of ANY of these crashes is how one tiny little thing set off the chain of events. Be it a dog (there are a frustrating number of dog accidents), a spectator or even just someone losing balance, if it weren’t for the smallest, most insignificant details of the Tour de France going wrong, none of these wouldn’t have happened.

A brutal day of heat ruined Joseba Beloki’s chances of up-ending Lance Armstrong in the 2003 tour. Entering the day in second place overall, Beloki hit a patch of road tar that had melted from the blazing temperatures. To compound the matter, Beloki was in the middle of a high-speed descent with Lance Armstrong on his wheel.

While this crash is now remembered for Lance Armstrong’s last-second decision to navigate around Beloki by crossing an open field, the crash itself was one of the more horrific in Tour de France history. Beloki ended up with a fractured femur, elbow and wrist, and he wouldn’t return to action again until 2004.

This historic crash occurred when leader Van Est flatted and went off the road, smashing down 70 meters of steep, rocky ravine. Of course, he was not wearing a helmet, but astoundingly the Dutchman walked away from the accident and got back in the race.

Perhaps the scariest crash to watch of the bunch, Jens Voigt’s epic disaster descending the col du Petit Saint Bernard, is one that cycling fans won’t soon forget. Voigt was traveling in excess of 60 mph when his front wheel hit a bump in the road, sending him face first over the handlebars. To make matters worse, a trailing photographer on a motorcycle just missed running him over.

TV cameras captured Voigt lying completely still for several minutes—leaving most of the viewing audience holding their breath in horror. In the end, Voigt survived, suffering a fractured cheekbone and a severe concussion.

During a Stage of the 2007 Tour de France, Marcus Burghardt a cyclist who was just starting out in the race, hit a dog because it was left, nay, UNLEASHED onto the cyclists by a negligent owner.

Thankfully the dog is fine. Which is apparently all the camera man cared about because, if you watch the whole thing, the cameraman follows the cute little dog as it seals its own fate, then captures the spill between the cyclist and the animal.

After the cyclist falls flat on their knee, you see the cameraman barely pause to see if they’re okay, but follows the dog until we see it running along a person who looks like they’re going to help it.