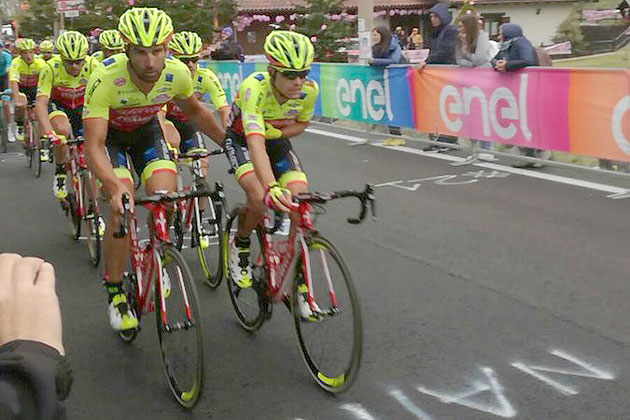 Thanks to his Wilier Triestina team-mates, Edoardo Zardini finished stage six of the 2018 Giro d’Italia despite having suffered a broken collarbone.

Zardini, who had been in the breakaway for the most part of the day, crashed right at the bottom of Mount Etna.

“A horrible day for the team Wilier Triestina–Selle Italia that is forced to say goodbye to Edoardo Zardini that was involved in a crash during the 6th stage of the Giro d’Italia,” the team said in a statement.

“At the bottom of the final climb to the Etna volcano the crash happened with Zardini that was able to end the stage before being transferred to the mobile clinic where the x-rays have found out the broken collarbone and the end of his Giro d’Italia.

“To Edoardo the best wishes from all the team for a fast recovery.”

The Italian team posted a photo of Zardini being shepherded by his team-mates into the final kilometre of the stage, saying “This is a great picture. All the team helps Zardini to reach the finish with a broken collarbone. The meaning of team work.”