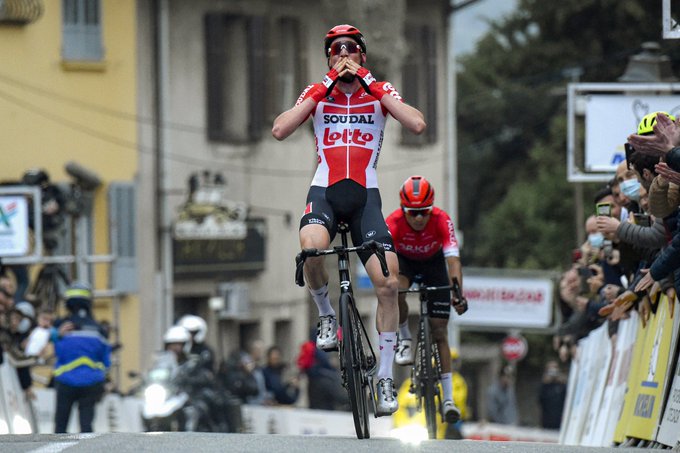 Tim Wellens has won the second stage of the Tour des Alpes Maritimes after outsprinting Nairo Quintana in the final meters.

Lotto Soudal worked throughout the day to keep the gap to the breakaway small and managed to do so indeed, with the breakaway caught before the final climb which saw a reduced peloton go up the Col d’Éze.

The peloton hit the very tough slopes of the climb with AG2R pushing the pace and very early on Nairo Quintana attacked the group going solo. Guillaume Martin briefly jumped across the gap, but the Colombian was the strongest up the climb and built a solid gap into the summit. He was chased however by Tim Wellens who kept the gap stable at around 10 seconds with 6 kilometers to go and then in the favourable flat roads managed to reel Quintana in.

The duo worked together to the line but the fight was never balanced, as Wellens easily outsprinted Quintana to the line taking his second win of the season, and the second out of two for Lotto Soudal in the race.

Valentin Madouas sprinted to third place in the chasing group that came home in bits, 25 seconds behind.

“It was definitely not an easy stage but just like yesterday I felt really good and with the way the team worked tirelessly, it was just a joy to race like this,” Wellens said. “They brought me towards the foot of the Col d’Eze just perfectly.

“I started the climb in ideal position but when Quintana launched his attack, I didn’t have an immediate answer. I realised he went a little too fast so I needed to pace my effort and I could eventually make up ground a bit later.

“To be honest, I was struggling on the plateau just after the summit but when I finally caught Quintana, I think that I broke his morale a bit. I knew the finish all too well because I live just a couple of kilometres away in Monaco.”