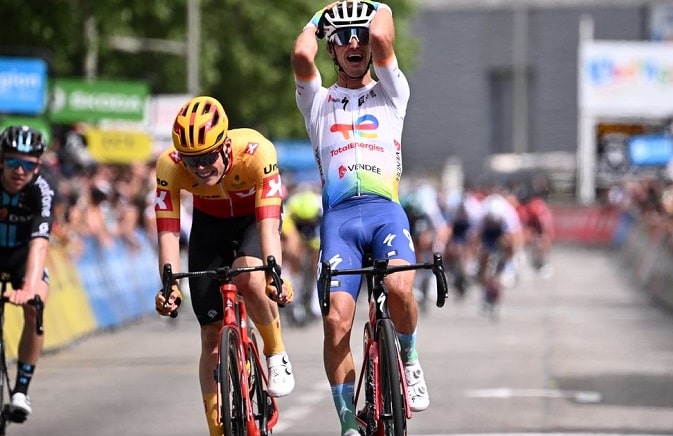 Alexis Vuillermoz edged a frantic sprint for the line by five breakaway riders on Monday to take the overall lead in the Criterium du Dauphine.

The five men broke away early in the 170km second stage to Brives-Charensac. They built a lead of nearly four and a half minutes before nursing their shrinking advantage over the final kilometres.

With the charging peloton closing in, Olivier Le Gac of Groupama-FDJ seemed to catch out the other breakaway riders with an early surge for the line.

But Vuillermoz, a Frenchman with TotalEnergies, and Norwegian Anders Skaarseth of Uno-X gave chase and passed inches from the line.

Wout Van Aert led the pack home five seconds behind, but could not save his overall lead.

Vuillermoz is three seconds ahead of Skaarseth, four ahead of Le Gac and five clear of Belgian star Van Aert in the general classification.

At 34, Vuillermoz took the ninth win of a career that includes a 2015 Tour de France stage victory on the Mur de Bretagne.

“It is great to win again after the crash I had last year,” Vuillermoz said. “The goal wasn’t actually to be in the break tomorrow, but once we were in the move, everyone committed to the line. It’s a great victory.”

Tuesday’s 169-kilometre-long third stage is a hilly ride from Saint-Paulien to Chastreix-Sancy.