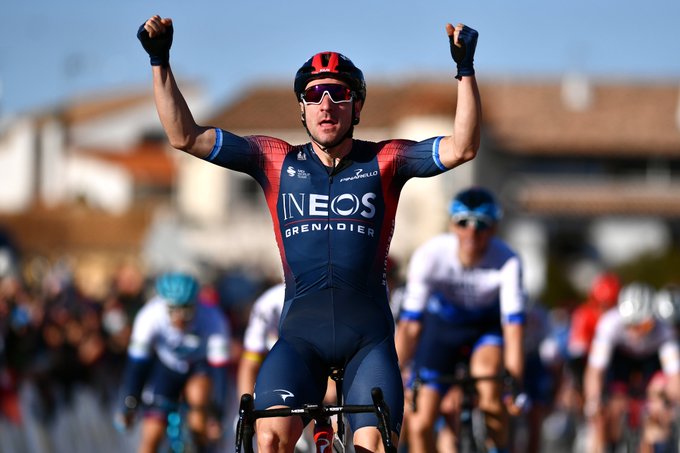 With some 80km remaining, the wind pulled the peloton apart, with Viviani and Filippo Ganna in a group with Richard Carapaz, Julian Alaphilippe, Sep Vanmarcke, Pierre Latour, and Nairo Quintana.

With no other sprinter present, Viviani was in the box seat, and Carapaz worked hard late on to keep the race together, before Ganna helped shut down a key move from Maciej Bodnar.

“It was not an easy flat stage because of the wind. We moved really well and we have some experienced guys from the Classics like Luke Rowe”, said Viviani.

“When we saw we had four in front, and also Richie with us for the GC, we thought it’s good and we kept pushing all day. When we saw there weren’t any other sprinters in the front (group) of course we were happy about that. I felt a bit of pressure but the guys did an amazing job. Ganna closed the gap on Bodnar which was a dangerous attack in the last few km. Then Luke Rowe did a perfect lead-out for me. Thanks to the whole team for their great job today.