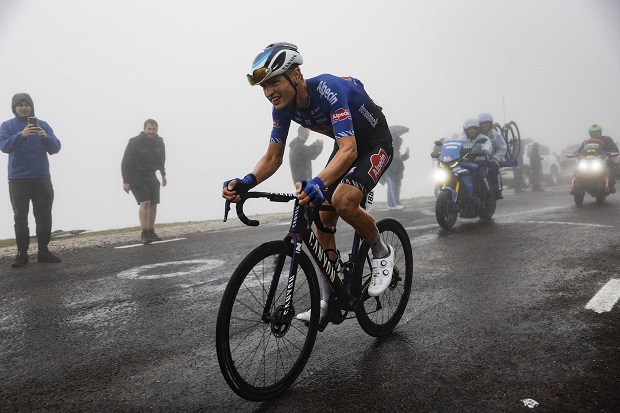 Remco Evenepoel grabbed the leader’s red jersey at La Vuelta in a dramatic conclusion to a rain-drenched sixth stage won by Jay Vine on Thursday.

Evenepoel, long-tipped as a Grand Tour winner, put the hammer down through rain and fog and finished 15 seconds behind Vine (Alpecin–Deceuninck) who claimed his first career win.

Primoz Roglic, who took the red jersey on Tuesday but relinquished it on stage five, appeared to struggle on the final climb, the first category one ascent this year, and trailed home in a group of fellow GC contenders one minute and 37 seconds back.

Vine produced a stunning late solo, catching Mark Padun within 6.5km of the summit finish and powering through the mist to claim victory.

Evenepoel leads the standings by 21 seconds from Frenchman Rudy Molard whose hopes of keeping the red jersey were hampered by a mechanical before he got dropped.

Roglic, bidding for a fourth successive Vuelta overall victory, is in fourth place overall, one minute and one second behind.

While he will not be panicking, losing ground to the dangerous Evenepoel was not in the script.

“I didnt’s have the legs for the win so I just fought all the way to the finish,” Roglic said. “There is a still a long way and today we lost a bit but hopefully we can gain a bit later on.

“I see the other riders have got stronger but I didn’t need any proof. Everything’s fine and we go to the next stage.”

Vine said winning the stage was a dream come true.

“It’s unreal to be able to do that and to that from the GC group is incredible,” he said of his winning breakaway.

The 181km stage was always likely to be decided on the final climb, and while Evenepoel did not win the stage, his performance was a massive statement of intent.

“I’m really happy and proud to be the leader,” Evenepoel said. “What I’m showing today is maybe one of the best things I’ve done on the bike.”