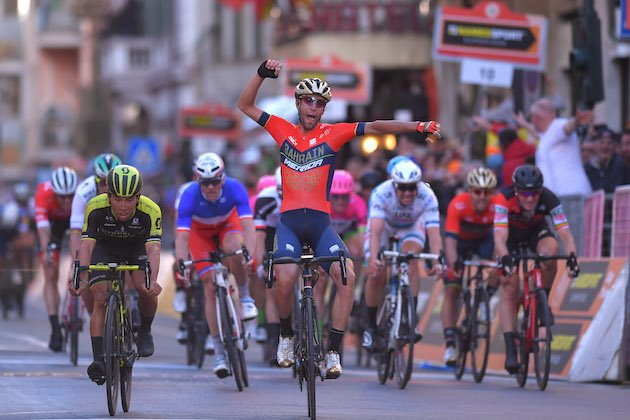 Vincenzo Nibali (Bahrain-Merida) carried off a daring solo attack to perfection to win the Milan-SanRemo on Saturday and add to his long list of major achievements.

Nibali accelerated away from the pack on the Poggio, the final climb of the 294-kilometer (183-mile) race, with 7 kilometers to go.

The Italian then showed off his downhill skills on the technical descent and narrowly held off a pack of chasing sprinters on the flat finish.

Nibali looked back only once, with 50 meters remaining, and realized he had time to raise his arms in celebration before crossing the line in a time of 7 hours, 18 minutes, 43 seconds.

“Today in Milan-San Remo it was all day water, rain rain rain, my sensations were very good but today I was working with Sonny Colbrelli and in the last 15km I had really good sensations,” Nibali said. “On the Poggio I worked with Colbrelli but in the last 5km I only followed the other rider. When my on my radio the director spoke with me and he said 20 seconds, I only thought ‘full gas’. It’s a fantastic day for me.