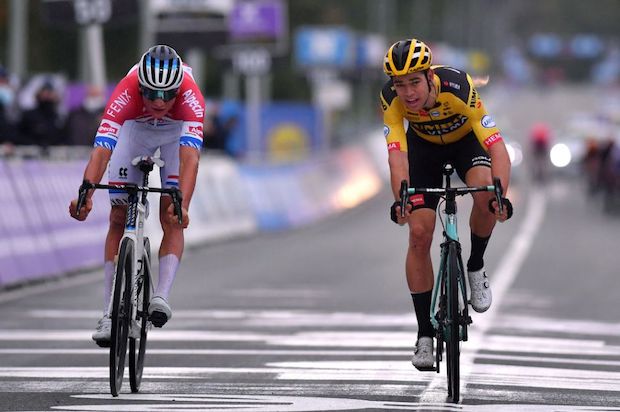 Mathieu van der Poel beat his rival Wout Van Aert in a photo-finish sprint to win the Tour of Flanders on Sunday, as world champion Julian Alaphilippe crashed out of the race.

“I was looking behind me at Wout, not at the chasers. I knew that the later the sprint was started, the more it became to my advantage. The fact that Wout started late was a sign that he, too, was tired to death. I caught him perfectly, but he came halfway next to me”, said Van der Poel.

“Then the acidification came to my ears. Suddenly it was there. I feared I was too late with my jump. I didn’t dare to cheer. They told me twice that I had won, but I asked for confirmation ten times. This makes up for so much. The number 51 [like father Adrie] will be something special.”

Alaphilippe, who had split the peloton with an attack in the Kopperberg, went head over heels after his right elbow clipped the back of a race motorbike 35km from the line after the trio had broken clear.

Van der Poel, riding just in front of the Frenchman, narrowly avoided the bike on the right side of the road.

Alaphilippe eventually sat up, holding his right arm and screaming in pain before being attended to by race doctors.

Van Aert had been looking to become the first rider to win the Tour of Flanders and Milan-Sanremo in the same year since Eddy Merckx in 1975.

#RVVmen An exciting race and an even better finish! Way to ride @mathieuvdpoel ! 🇳🇱🥇 #RVV20 pic.twitter.com/IQzXNLnJeR