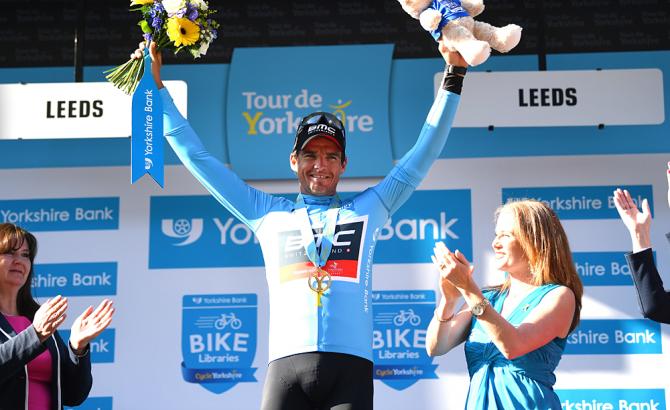 The Tour de Yorkshire saved the toughest stage for last with the 189.5km route littered from start to finish with short, steep, punchy climbs of which six were categorized and many had gradients that tipped over into double digits.

At the Arthington climb, with about 15 kilometers to go, Greg Van Avermaet made sure to pick up a few bonus seconds while race leader Magnus Cort (Astana) struggled at the back and was eventually dropped.

With 5km to go, the gap to Rossetto was 1’20” and eventually he was able to hold on to take the win as Van Avermaet and his teammates continued to capitalize on their advantage heading into the final kilometer of the race.

After being positioned perfectly onto the home straight by his teammates, Van Avermaet surged towards the line to take second on the final stage and secure the overall victory.

“We had a pretty good plan. We wanted to put Brent in the front as he was still a GC contender and that worked well. Magnus Cort Nielsen could not follow so it was up to us to take a bonus second and then at the end of the stage, it was good enough for the overall”, said Van Avermaet.

“It was really hard with more than 2000m of elevation. Everybody is in good shape, everybody did what they had to do, and I’m super happy that I can finish it off. When the race opened up, we still had three or four guys there and we really tried to control the situation. We were only five guys but everyone did their best so it’s nice to finish it off.”